Ride Report: The Googie Zombie Ride
"Googie" is a predominantly Southern Californian architectural style of the 1950s and '60s that took its cues from the car culture of the time and riffed on space-race motifs and the cover art of sicence fiction pulp novels. Roofs swooped and jutted like pagodas on acid, right angles seemed to have been banished, towers and pylons looped skyward, circular bays bowed out of tilted walls, and plate glass opened interiors to curving walkways shaded by vast, undulating overhangs. Buildings and signs were often decorated with atom or flying saucer designs, while chrome and formica furniture glinted under rocket-shaped lampshades. If you ever watched the Jetsons cartoon as a kid, you saw Googie informing everything in every scene, from furniture to clothes to hairstyles.

You can read more about Googie here.

Cycling architect James Black (co-creator of our James Black Hat) has been leading rides every month this year to visit, photograph, and eat at the remaining Googie coffeeshops of Los Angeles. (You can read about the entire series the Lower Modernisms section of Architecture Burger.) While scheduling conflicts kept me from all but one of the earlier rides, I was able to participate in this final ride, known as the "Googie Zombie Ride," because it visited Googie coffee shops that had been converted to other uses, or were occupied by Starbuckses. Some of them were barely recognizable as Googie, but some others, blessed with savvier owners, had been morphed into homages to their own pasts, while a few were simply pathetic. And one--Dinah's--was still a coffee shop, and still serving large portions of the heavy Middle Amurricun fare typical of Googie cuisine.

So, here are photographs of what we saw: 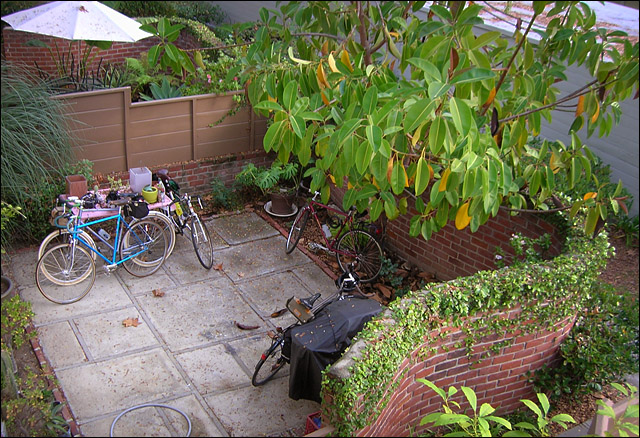 Our bikes, waiting for the ride to start. 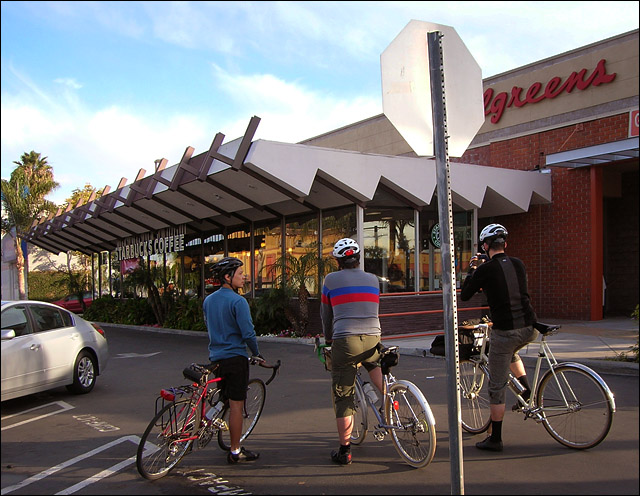 This Googie coffee shop on Crenshaw was originally attached to a bowling alley, which has been demolished and turned into a Walgreen's. 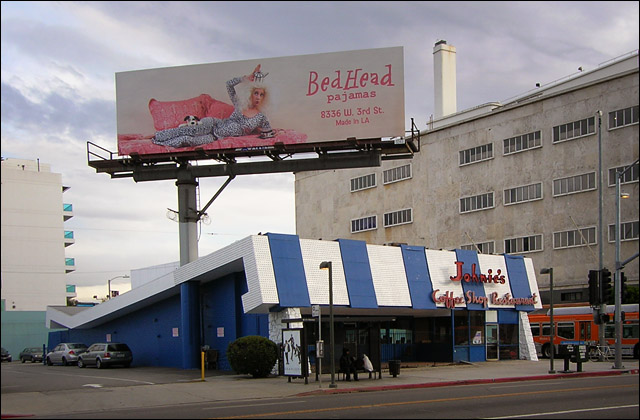 Johnies at Fairfax and Wilshire, now used mostly as a movie set. 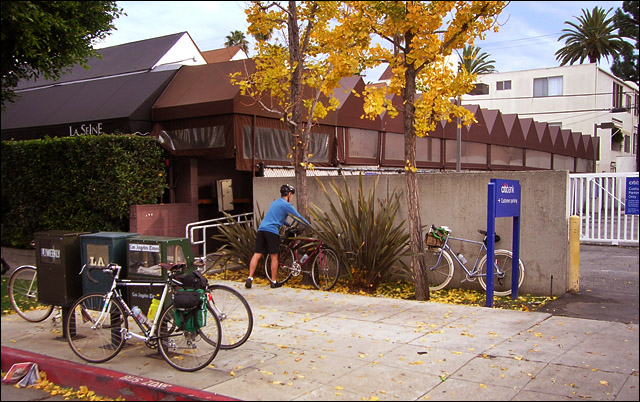 Formerly Tiny Naylor's, once a happening place in LA. 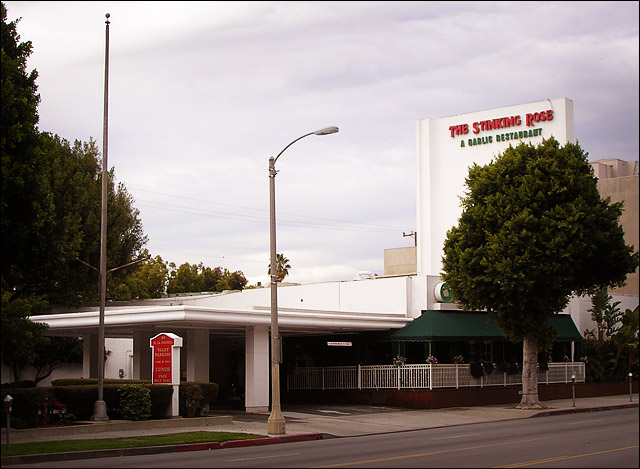 This used to be Lawry's, which moved back and forth across the street a couple of times. Barely recognizable. 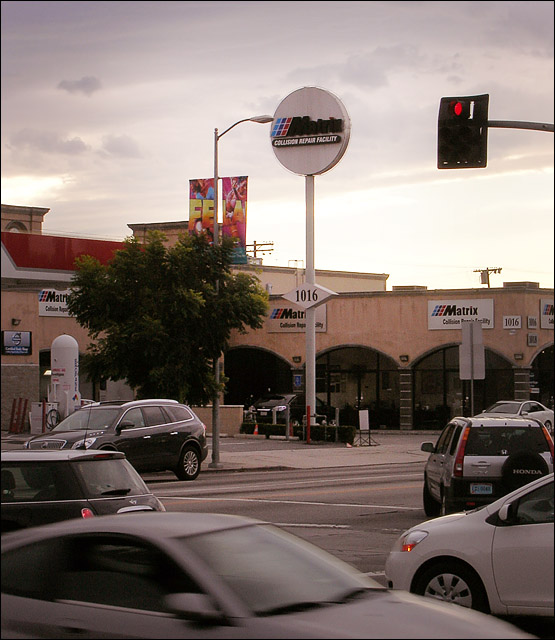 Ships was once an icon of midtown--now all that's left is the sign, and almost all of that has been modified beyond recognition. 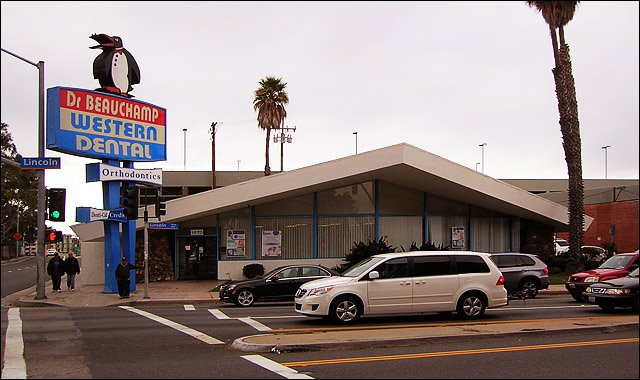 Penguins in Santa Monica held out a long time, but is now home to a credit dentist chain's outpost. 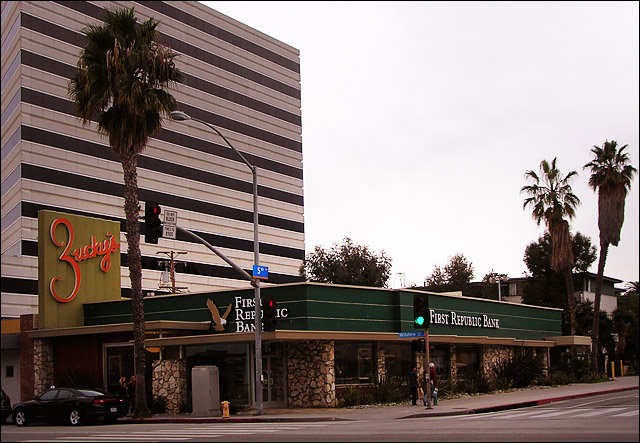 The bank that took this over specializes in "wealth management." Also in Santa Monica. 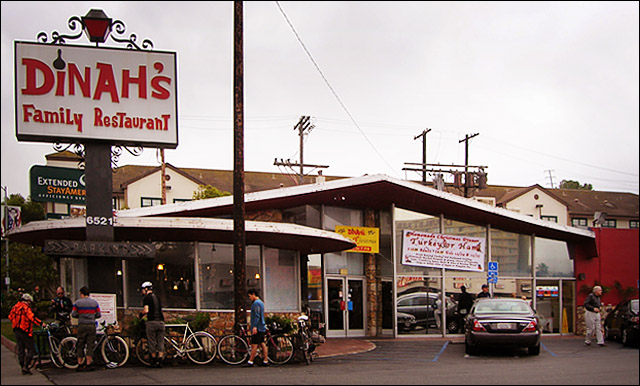 Still serving up the big portions! Dinah's specializes in fried chicken and German pancakes. I had their tolerable vegeburger. 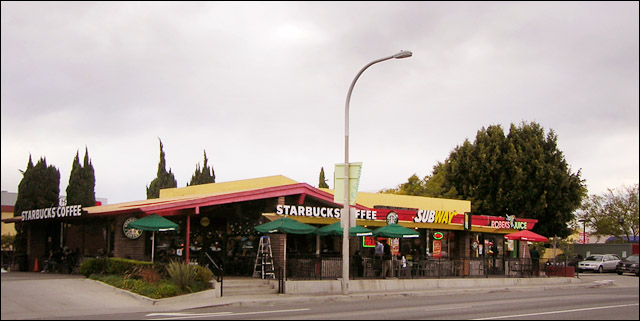 The other Ships, in Culver City.

The ride covered a total of thirty miles on a sweet December day with occasional light rain. Three vintage fixed gears, two vintage road bikes, and a current Rawland. Four architects, a fellow from the movie biz, and me. And a worthy tour of Los Angeles's hidden history....