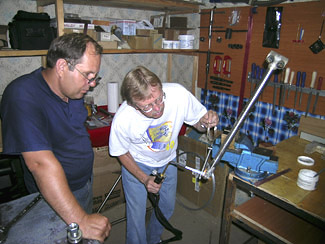 Doug showing Kostya the finer points of brazing.
For the past 6 years, I've been evaluating and making a model of a transportation bicycle that can be used by pastors of my church in Ukraine. I've been excited and challenged to do this because I believe the value of this project goes way beyond this church or the country of Ukraine. The world--including the USA--would be a better place if people had a bicycle to ride instead of needing to either walk (the alternative in poor countries) or drive a car.

My real job, which I've been doing for the last 30 years, is making and painting custom bicycles, so I have some background to design what is needed--but the challenge is that there is little in the States as a model for what is just practical transportation. That inspiration had to come from the past and other countries.

I should add that the primary purpose of these bikes are short runs in good clothes, although need often stretches what can be defined as "short." They are ridden on usually moderately level terrain at a walking effort of 8 to 10 mph, so that one doesn't need a shower and change of clothes at their destination. They can get really loaded down carrying stuff. I'll outline my journey toward make such a model. 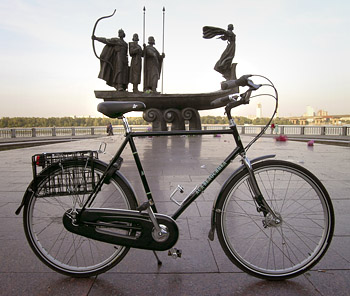 What the world needs now....
This project began with a call from the big University church north of me for members to donate bicycles so students in its sister school in Russia wouldn't have to waste time walking so much. Lots of 70's era bikes showed up, which included Chicago built Schwinns and 3 speed Raleighs and so on. These bikes were a great place to start the evaluation of what works well to get around on.

The problem with them for this project is their 26 X 1 3/8" and 27 X 1 1/4" tires. In addition, it didn't make sense to spend the money and effort to fix them up for the same money that could buy a new one in the country where they were needed. However, I really came to appreciate how a Schwinn Suburban--with its fenders painted to match--could be taken apart and its steel derailleurs put back together, leaving it almost like new again after years of service. In other words, durability trumps over saving a pound or two on an already heavy bicycle. When I was growing up, I wouldn't be caught dead on one, however.

My next learning experience came in Holland (where bike transportation is normal and common); I picked up a steel framed RIH bicycle with a Brooks saddle. Dutch companies like Gazelle and Batavus make bicycles for transportation. Let me outline the features that make them practical.

I designed the frames to use 26 X 1.75" because I felt this size was suitable for both paved and dirt road use. It is also a common size around the world. Over the years, I've made various samples of these frames and then modified the design after trying them. They are not far off of what has worked well for decades. Our translator's dad was able to laser cut specific frame parts.

Kostya is Chernobyl survivor who was an officer in the army sent in to clean up after the meltdown. I've trained him to build frames in Kiev. (One of our major sponsors wanted as much of the money raised as possible to be spent in the country itself. That is why we don't send in boxes of them from Asia.) Herbie is a college student that has worked in my shop this last year and is going over for 3 months during fall semester to give Kostya a hand. He is making these frames right now before he heads over in September. Some of these will be for sale here to help defray his costs, write me if you are interested. They will probably be around US$1500.00 with better parts and a custom paint job. 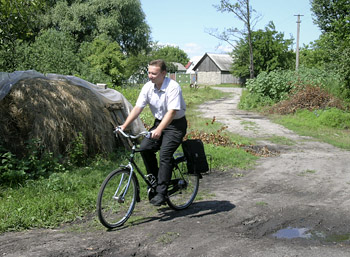 Ukrainian pastor making his rounds.
My idea of what I want a transportation bike to look like is one without lots of pizzazz so it doesn't stand out much when parked at the grocery store. I'm not sure this would encourage buying one, however. Nevertheless, at some point I see these bicycles as having a potential American niche market. It is what I think Americans need to travel shorter distances by bicycle but don't know it yet. Following my custom building roots, I would make available options in equipment and paint jobs.

The problem with selling them in the States is that I'm not sure even experienced American cyclists would see them as meeting their needs. We are programmed to look for lightness, style, and "value" (defined as getting something as cheaply as possible, with Chinese production bicycles being the price benchmark). I'm not sure I would have given them a chance myself without the project to challenge my perceptions. The Dutch or Germans, however, would see them as ordinary--what they use everyday. In addition, they expect to pay for such quality--low price isn't as much a driving factor as it is in American culture.