Introduction
In late 2001 my partner Holly and I bought a 32" Bikes at Work (BAW) bike trailer. We looked at a lot of trailers and this seemed to be the only one suitable to all of our needs. At the time, our cargo included things like very large grocery shopping hauls, cases of wine, gardening supplies, and so on. 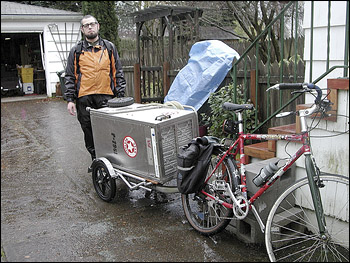 Bikes at Work is a small company based in Ames, Iowa. When they are not taking orders for their trailers, pedi-cabs, and their book about cargo cycling, they make their living as cargo cyclists. The 32" long model is their smallest, and they offer two other standard models in lengths of 64" and 96". They also produce custom designs and the aforementioned pedicabs. They sell directly from their web site and via mail order.

The BAW trailers are distinctive from other trailers for a couple of reasons. For one thing, they can carry loads of up to 300 pounds, where most other trailers are limited to 80- to 100-pound loads. We don't max out the weight capacity very often, but we definitely wanted more than 100 pounds of capacity. Also, where most trailers have a fixed or closed shape, the BAW trailer is a frame built of tubular aluminum. It's designed to carry two Rubbermaid tubs, but it can also be made into a platform (using, say, a piece of plywood) to haul larger or oddly-shaped objects. This design provides a rigid bottom surface, in contrast to many of the other trailers we looked at, which are primarily designed for hauling children and have fabric platforms stretched onto aluminum frames. We wanted a solid, impermeable bottom surface for carrying heavy, dense objects such as cases of paper and sacks of garden amendments.

Thoughts on the Process 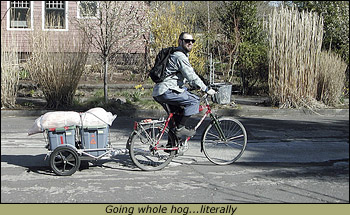 Sometimes it's a lot of planning and preparation to carry stuff on a bike trailer like this. You want to make sure your load is centered, balanced, and as low as possible. And if it's raining, you need to figure out a way to keep your stuff dry. (The Rubbermaid tubs are waterproof.) Also, of course, pulling a hundred pounds of cargo is more work than just riding. Sometimes it is very hard work, and that's OK with me because hard work is something I have come to value and respect in myself and in others.

Surprisingly, with most loads, the Bikes at Work trailer is very stable, and its effects on handling minimal. There's a learning curve to how it changes the way the bicycle rides, but five years on I don't even have to think about it; I just go into cargo-mode, and get where I'm going.

Of all the bicycle cargo solutions I've tried, pulling a loaded Bikes at Work trailer is by far the easiest and most efficient. We've gone on five- or ten-mile trips to pick up various loads, and these rides are just as pleasant and convivial as any other bicycle ride. I have come to really enjoy the whole process. It's extremely satisfying to haul some improbably big, unwieldy thing using a bicycle and human power. It is similar to the pleasures I get from camping, home preserving, or raising chickens.

What's It Cost?
When people stop to ask me about the trailer, they usually want to know three things, in this order:

I've already answered the first two questions in this essay. The answer to the third question is, our trailer cost about US$400 including shipping, five years ago. Since then it has required US$30 in maintenance, when I replaced the wheel bearings last winter. I don't think that would have been necessary had I kept the trailer indoors, but in our last home we had to keep it on the porch throughout rainy winters, and the bearings got rusty. 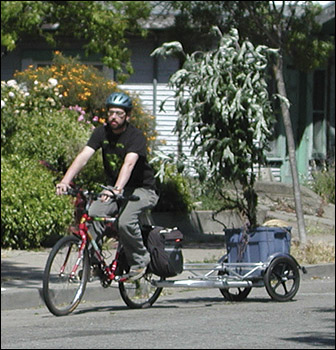 Inevitably people balk at the cost. I don't know what they expect it to cost. To me the cost is not even the point. An object that allows me to carry nearly anything I want to, using my muscle power and my bicycle? I don't spend a lot of time fuming over what else we could have done with that US$430, let's just put it that way. Instead, I tend to think of our last automobile, whose monthly payments were around US$400, and whose annual scheduled maintenance costs ran about US$1000 at the minimum, provided we didn't encounter any unexpected problems--and that doesn't account for automobile insurance or gasoline costs.

Of course, the benefits of a bike and trailer compared to a car are deeper and more subtle than that.

Let's just take one example--new tires. When my car needed new tires, it involved scheduling an appointment with a business I never otherwise visited. The cost of replacing the tires on my car was usually in the hundreds of dollars, sometimes several hundred, depending on the car. While this work was done by the tire-replacement experts, I could either sit in their waiting room, blanketed in the aromas of burnt coffee and tire dust, or I could strike out on foot to the nearest coffee shop or public space to kill some time and drink some tea--but, alas, most tire stores are located a mile or two distant from any such places.

In contrast, when my bike or my bike trailer needs new tires, I travel to my local bicycle store, which is located close to my house, in a pleasant urban neighborhood. Since I visit this shop for many reasons, many times throughout the year, I know the people who work there, and we generally enjoy one another's presence. I buy my tires, and whatever else I need, and even if I go a little crazy, I'd be hard pressed to spend more than US$100 to replace the tires of my bicycle and my trailer combined. Heck, let's throw in some extra tubes and a new bike map. Then I go home and replace the tires myself.

Now, I realize that for many people, the purchase of a US$400 trailer will not be their ticket out of individual car ownership. But it's a big step in the right direction, and in the context of most things we value, the cost seems negligible to me.

Conclusion
When I think back on how long it took me to learn to live car-free, I am reminded of just how much of an effort it is to make that change. There are so many different aspects to life that inform one's ability to live with or without a car: where you choose to live, where you work, the infrastructure of the place in which you live. For some people, car-free living simply means walking or taking transit, but for many Americans, the distances we've built into our populated areas are great enough to make that solution impractical. 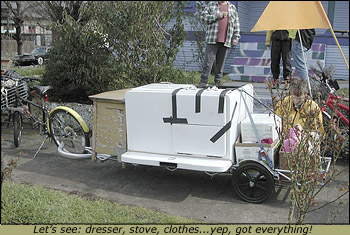 For me, the ability finally to give up the car involved a combination of changes and efforts over the past 20 years: the gradual development of our home business; a string of moves to cities that support small-radius urban lifestyles; a move away from some of the activities I practiced when younger (playing in rock bands, going on antique hunts); and, positioned near the end of this path, researching bike trailers and procuring this Bikes at Work trailer.

There was no one factor that really kept me from living car-free, then. But if I were to pin it onto one, I think it was the Big Grocery Run that was the clincher--the thing that kept me from selling my car over the years, or from thinking even in the most general way that I could live without a car. Once, years back, when I lived in Seattle, my car was dead on its wheels, and I didn't miss it for months. At the time I used my bike or the bus to get to work and to many other destinations. It was easy enough to live without my car...except for when I needed to hit the grocery store for a big shop. Then I borrowed a roommate's car, until I finally got my car fixed (or did I replace it? I can't remember). I didn't know about bike trailers at the time. I concluded, reasonably enough, that one needed a car for certain things.

When we did get the trailer in 2001, we'd been living mostly car-free for a while; it was nearly two years after getting the trailer that we actually did sell our car. But I like to think that the Bikes at Work trailer was the missing link--it made it possible finally to rid ourselves of a private automobile for good.