The second time Chuck Schmidt emailed me an invitation to join his Vintage Bike Ride in Pasadena, the weather services were not predicting temperatures of 100 degrees F and up for the inland portions of the greater Los Angeles area, so I decided to go along, though the ride starts at 11AM; that's a bit later in the day than I generally favor. And, given the later start and the description on the Velo-Retro website of its moderate pace, I decided to invite my wife Gina along. So off we went last sunday morning, riding leisurely up Sixth Street to the Wilshire Western Metro station, where we caught a Red Line train downtown to Union Station, where we could pick up the Gold Line to Pasadena.

The Gold Line ride is a relaxing ramble through and over leafy canyons, past wide parks and quiet clapboard neighborhoods and charming little Main Streets here and there; it also crisscrosses the dry gulch of the Arroyo Seco and the dull gray trench of the Pasadena Freeway (the world's first real freeway) several times. I always enjoy it, and it was considerably improved this time by the presence of a young fellow on his way to work, who had ridden to Union Station on an immaculate, Campy-equipped Tommasini that he had just picked up on eBay.

I'm always happy to encounter another transportational cyclist in LA, and I'm always happy to see a bike that's both elegant and practical--and it was fitting that I should meet someone riding a vintage bike on my way to a vintage bike ride, after all! We had a nice chat; he asked a lot of questions about riding fixed (since I naturally had Satchmo, my old Fuji fixie, along), and the time passed quickly.

Gina and I got off the train at the Del Mar stop and pedaled through Old Town Pasadena to the Brookside Park and the Rose Bowl.

The Arroyo was green and cool, and the maze of old concrete road bridges confusing but amusing, especially since we had plenty of time--we were first to arrive at the meeting place for the ride. There was a diving competition at the nearby Aquatic Center, which we watched till the next few riders arrived. 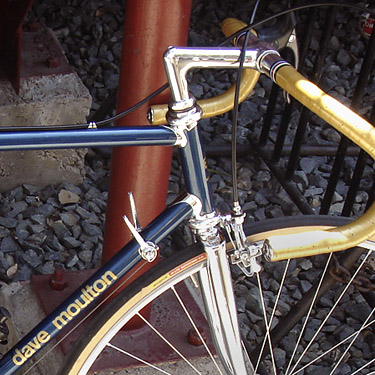 Chuck Schmidt's Dave Moutlon (Photo: Yanko Damboulev)
They trickled in soon enough, some by bike, most by car. Although modern bikes aren't prohibited, this time the rides were indeed mostly vintage. I can't remember all the bikes that showed up, but besides Satchmo and the Mule (Gina's XO-2), who were definitely the poor relations of the bunch, there was Chuck's immaculate Dave Moulton, with original paint and polished lugs--possibly the prettiest bicycle I've ever seen, with a modest elegance that outshone the extravagances of the nouveau riche road bikes of the present. It was so perfect I found it hard to believe Chuck actually rides it outside--and oddly enough, it seemed just as clean near the end of the ride.

There was a restored Cinelli, also with polished lugs, also profoundly elegant, and a beautiful brown Raleigh complete with Brooks saddle and fenders. The rest of the bikes would have been attractive on their own, for the most part--there was a couple of sweet fixies (one a custom Kish), many road bikes, a frame made by a fellow who builds mostly for himself and friends, and only one or two contemporary machines--but the Moulton and the Cinelli stole all the attention. Or at least all my attention.

Right at eleven, the ride took off, crossing under the freeway and the Art Deco Colorado St. bridge (aka the "Suicide Bridge"), winding along the curving road on the east bank of the Arroyo, past large, comfy-looking California bungalows, and under an endless canopy of richly-leaved trees. After two or three miles, we broke away from the Arroyo, turned east, and headed into a part of Los Angeles that I knew little of despite my many decades here.

The pace was brisk--"moderate" only in club-rider terms--and I worried a bit about Gina, who was riding a heavy bike and carrying her gigantic custom-made R.E. Load messenger bag; she was also the only one wearing Army surplus camouflage pant. Everyone else was in full Spandex, logos and all, on zippy little race bikes. (The one exception was a genial fellow on what seemed an oddly-proportioned roadified MTB, who--I realized when he got off the bike--was about the size of a locomotive.) However, the girl did well and kept right up on the flats--I could hear her talking with the other riders a few feet behind me.

The flats east of the Arroyo are almost paradigmatical suburbs--wide, meandering streets with little traffic and nothing much to see, except for endlessly reiterated lawns and the low sprawling ranch houses with windows shuttered behind a low spray of shrubbery. The quiet was the most astounding thing to me--my daily rides are through the heart of Hollywood at rush hour, so even when I'm on side streets I meet a lot of cars, and I can always hear the heavy traffic on the boulevards not far away. Chuck's standard route seems calculated to avoid noise, and to foster rolling conversation--which it does. We passed a golf course, hidden behind an ivy-clad chainlink fence; we passed a car; we passed another long low empty-seemeing well-kept house. Once in a while the group came to a main road and actually stopped for the red light.

We rode east for more or less ten miles and then turned north, and the farther we rode, the taller, grander, and more numerous the street trees became, till we were riding under a glory of sunstruck sycamores glowing an otherworldy green underneath as we enjoyed their shade. As the day was warming up, this felt as good to the skin as to the eye. The northbound leg of the loop began a long, gradual climb into the foothills of the San Gabriels, and soon all the fixies were concentrated at the front of the ride, with my wife and the large fellow bringing up the rear, accompanied by a couple of the fast riders so they wouldn't feel too lonely. 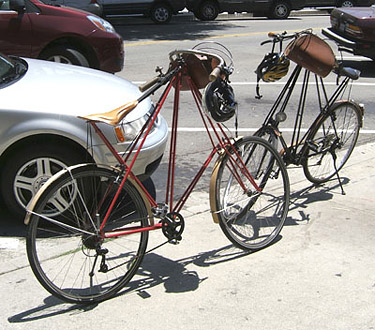 A pair of Pedersens (Photo: RR)
The climb left the tree zone rather abruptly--I suspect a change of municipalities, or at least newer neighborhoods--but after a bit more wending and huffing we ended up at a coffeehouse in Sierra Madre, located on a wonderful little Main-Street-like block of shops and eateries that seemed almost right out of the '50s--down to the skinny blonde kids with crewcuts that seemed to trail behind every soccer mom. The street itself was a bit alpine in inclination, but the scene was pure Americana, and very relaxing. Soon a local couple--friends of the ride--pulled up on matching Pedersons with wood fenders and offered rides to all. Gina and I took them up on it; Gina liked the bike, but it reminded me too much of the old Steyr three-speed I had as a kid: slow and squirrelly. Still, it was fun to meander around bolt upright for a while, feeling like a professor pedaling to class at some Copenhagen university.

Coffee and pastries digested, we took off again, heading back to the Rose Bowl, though Gina and I peeled off, as I could see she was feeling tuckered out. We caught the Gold Line in Old Town Pasadena--there was a fixie punk I recognized from the Midtown Critical Mass in the next car--and in a short while we were back at Wilshire and Western for the short pedal home.

All in all a great day--we saw bikes we'd only ever heard of before, and some we'd never heard of at all, met some fine people, and explored neighborhoods we had neglected for far too long. Many thanks to Chuck and all the good folks we rode with last Sunday. We had a good ol' time!