Slipped on my oldest pair of knickers today to pre-run my upcoming Stairway to Heaven ride (to Franklin Canyon) with a couple of friends.

I was pre-running it, though I've ridden it dozens of times over the years, to see how well people a little more normal than I am would like it--it involves two short but EXTREMELY steep climbs, which I rode fixed, and the approach to it runs through a matrix of really quite pleasant city streets--but it just might not be everyone's cup of tea.

Patrick and Drew showed up, Patrick on a Bianchi and Drew on a Masi, so with the Bambina (my Bottecchia) along we had an all-Italian group. After coffee at Black Dog on Wilshire, we plunged into the depths of Beverly Hills, dodging limousines and Lamborghinis (literally, by the way) till we scooted up Rexford Drive to the lawyer-lined seclusions of Coldwater Canyon. Just barely up Coldwater from Sunset we turned again, passing a little park and playground and climbing into a canyon faced with houses that would have seemed cute and cozy had we not known that each one cost several times what any of us was likely to make in a lifetime. But it was quiet, the air was sweet, and the jasmine in bloom filled the lungs with a scent as invigorating as the reminiscence of first love.

Soon enough, though, we hit the Stairway, basically not much more than a paved firebreak that ascended steeply up the flank of a canyon wall. It was a slow grunt on the fixie. Hell, it was a slow grunt on the geared bikes as well. One thing I love about climbing is the quiet: you often pass right by small animals whom the bike doesn't startle, and you hear the sounds of tiny communities in the shrubbery, sounds you would not notice at speed, with the wind in your ears. 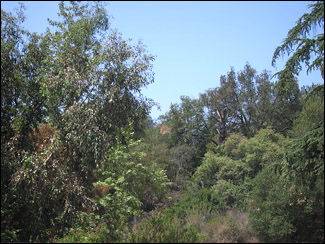 However, the climb does not need to be quite that steep to have the same effect! It's still well worth the effort.

At the top you enter a completely different world, rolling over the crest to view a deep green canyon ruffed with oaks and sycamores at the distant bottom, while the sky above hosted patrols of crows and ravens, hawks and vultures. The road wound gently downhill to the canyon bottom; we could have turned right to the spring and the meadow, but (of course) I led us to the left, to another steep but very short climb that led to a lake.

A man-made lake, to be sure, but one lined with reeds and shaded by more oaks and sycamores. Formerly a reservoir, it has been replaced by an underground tank at the bottom of the canyon but is maintained as a waypoint for migratory birds. Ducks, turtles, and a variety of fish populate it year-round, and the side canyons around it abound in the most charming glades and copses (as well, to be sure, as poison oak, bobcats, and an occasional cougar, the latter two keeping the rampant poodle population in check). 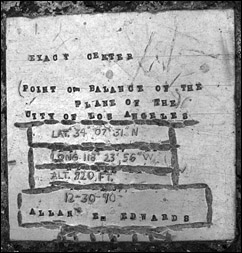 We parked the bikes by the little museum and hiked a short way up one trail to a half-hidden plaque marking the geographical center of the City of Los Angeles. While we were there, I heard gentle footfalls of something that was as heavy as a human but that did not stand upright. It stopped as it came abreast of us, and after a moment, deciding we were not worthy of bothering about, it moved on, with alarmingly feline grace and invisibility. 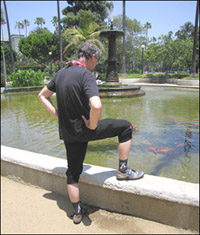 On the way back to the little museum where we'd left the bikes, we startled an immense female red-tailed hawk, who flew off carrying a very large and very dead gopher snake in its talons. She passed not forty feet from us, and alighted in a tree across a clearing. We followed--Patrick hoping to catch some video--and she moved on from tree to tree, visibly annoyed. Her diminutive mate joined her at the end; Patrick got his video; and I suggested we leave her alone for now.

The lads played with the exhibits at the museum for a while (this included a stuffed cougar of alarming size), and then we mounted up and finished climbing to Mulholland Drive, which famous thoroughfare we stayed on for less than a mile till we came to the crest of Coldwater and wound our way back down to Sunset. I took the lads on a quick detour to a little park bounded by Sunset Boulevard, Coldwater, Cañon Dr., and a traffic circle, where we rested a bit by the koi ponds amid lush landscaping before heading back towards Hollywood to Susina Bakery for lunch.

A short but invigorating ride! I'm going to drag a few more friends on it, for sure. It's one of those rides that make you happy to be in LA again, when you've forgotten why you love it here.