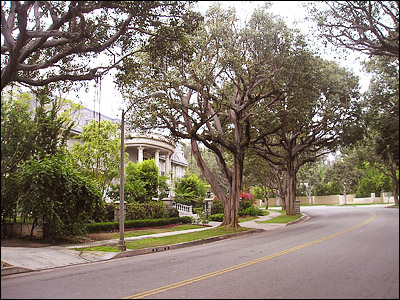 Little house on Rexford, near the foot of Coldwater Canyon.
I decided this gray Sunday morning that I wanted a slightly more demanding ride, and a prettier one than my usual as well. I've lived here so long that there are few streets in about a five by five mile bloc that I haven't ridden repeatedly, some of them thousands of times. Many of them are not particularly charming. But spring was here, the weather was good for climbing, so I headed west along 6th and then Burton Way to Beverly Hills, turned right, rode past more mansions than you could shake a golden sceptre at, and took myself into the semi-wild hills of Mulholland.

I chose Coldwater Canyon for the main climb, because it's lush with trees and landscaping, is pretty wide most of the way, and mostly because I hadn't ridden it for a long time now, so it was a refreshing change. I was on the Bottecchia fixie, and the hill was steep but not impossible, so I mashed on through the cool, misty air, past the occasional sweatsuit-clad dog-walker, and between stands of sombre eucalyptus trees and extravagantly purple bougainvillea till the road connected to our world-famous Mulholland Drive, named for the man who brought the Owens Valley water to Los Angeles nearly a century ago.

Once you're on Mulholland itself, the ride's fairly easy, though it does climb and drop pretty continuously. The houses here are larrge, but the lots are larger, and there's plenty of money for gardeners, groundskeepers, and endless spraying of that imported water. The natural hillsides in this area bear small-leaved, intensely perfumed chaparral, and a few oak trees, but on Mulholland you see banks of flowers, mounds of lush shrubbery, and artful small groves, behind which Spanish tile roofs and modernist sweeps of curved concrete demurely peek at the road, with no doubt a good number of typically-portly by well-armed guards in attendance in the shadows.... 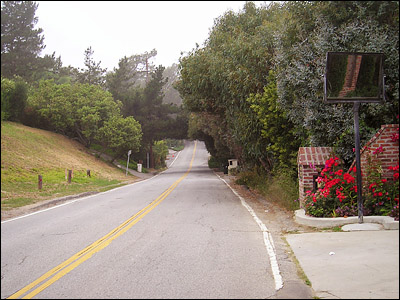 You wouldn't think you were in Los Angeles, or even in Southern California. 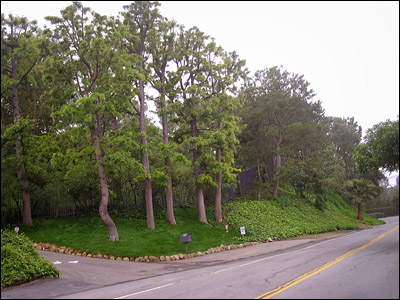 A few trees to shade the front yard.... 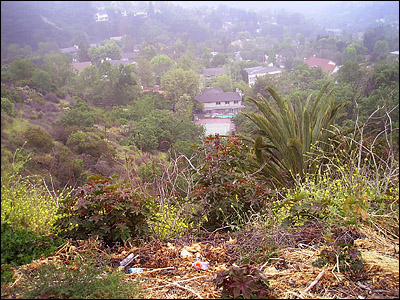 A cozy valley for the rich and famous. 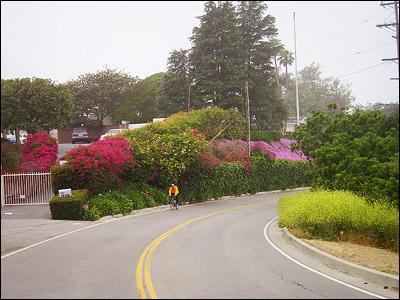 One of the few other cyclists I saw on the ridge.

It was too foggy for the grand vistas which have made this road famous, but for me the play of flowers in the gray air was more satisfying than the mind-battering vastnesses of roofs and freeways that constitute our landscape when seen from a height. 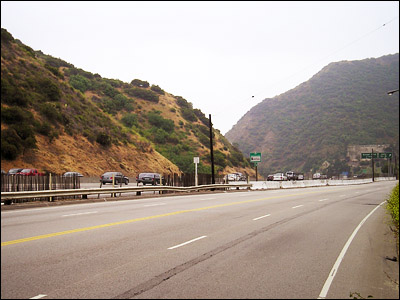 Sepulveda Blvd, and the 405 freeway.
The road looked almost quaintly English as it wound through masses of dark leaves, and there was little traffic this early in the morning, so the predominant sounds were those of birdsong and the chatter of sprinklers.

The silence was interrupted only occasionally by the passage of a car, or by a boor in a double-wide SUV lunging clumsily through the turns; once a pair of vintage Mercedes sports cars snarled past, play-racing in the loops of road, but mostly it was birds and irrigation that kept me company.

Alas, I arrived at the Sepulveda Pass all too soon, and pedaled down the wide, empty road, serenaded by the intense variable hissing of the freeway a few feet to my left. Once down to the flats, though, I crossed over to a residential area where I'd never been before, which I left by means of a hidden sidewalk that led, unaccompanied by any road (except the freeway just over the soundwall, of course) to the grounds of the Veteran's Administration, my usual shortcut to San Vicente Boulevard. 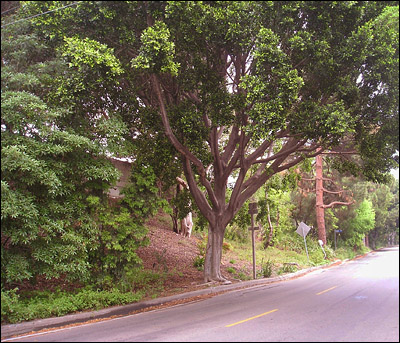 By the soundwall of the freeway! 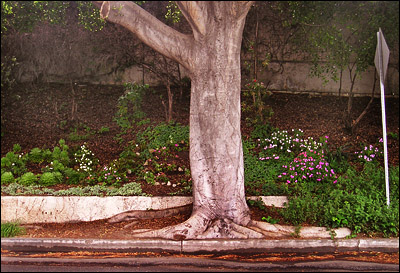 San Vicente is familiar turf; I ride it often, though it's not really a place for a medium-gear fixie, behind popular with the hammerfest types. 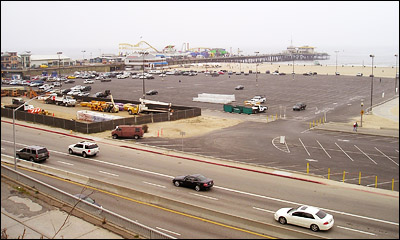 A parking lot, with the world's largest ocean for decoration....
Still, the Bottecchia usually puts on a good show, passing more roadies than she lets pass her, and the road is wide and smooth, with a grassy median and trees abounding. It led me to the beach, my official goal for the day, but I didn't linger there this time.

From Santa Monica I came home on big main streets, stopping once to add some air to a fellow's tires--an older man in a very elegant suit who was pedaling an old Giant ten-speed along the boulevard with two tires have deflated.

Home by mile 34, I went straight to the kitchen and had at a pair of pastries left over from yesterday, then made some Chinese-ish stir fry and called it a day. And a damn nice day at that.