The cliché is that Los Angeles has forgettable architecture and beautiful people, but that's not really true. There are plenty of stunning buildings of every style scattered around, as well as neighborhoods that are both charming and lively (though not often at the same time) breaking up the bleak stucco-tinted light. At the same time, there is no dearth of plug-uglies here, I assure you--I'm one of them myself! But the ride I took last Tuesday supported the clichés, and not the exceptions to the rule.

It's not often I am free during the week, so I decided to ride to where my dear wife Gina works, way down in Long Beach at the California State University, and meet her and her colleagues for lunch. Gina is one of the Beautiful People of Los Angeles, tall, slim, and graceful, a veritable Venus who doesn't believe it of herself but turns heads wherever she goes. How she ended up with me, I'll never figure, but I ain't complaining. 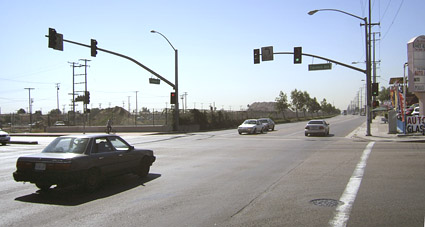 Alameda Street
The traverse from our Miracle mile neighborhood to Long Beach, however, is not what most people would call the Scenic Route, running as it does straight through the flat industrial wastelands south of Downtown: phalanxes of flat gray sweatshops, warehouses, grain elevators, tubing benders, junkyards (lots of junkyards), plating sheds (lots of plating sheds), four-story mounds of gray rubble, lots of gray corrugated siding, lots of thundering truck traffic, winding webs of railroad tracks, and the Alameda Corridor, the deep concrete trench built to route miles and miles of trains out of the Harbor area and towards downtown and the nexus of rail transport leading to every part of the USA. Trucks grunt, cars whiz, locomotives rumble ominously underground, odors of solvents seep out of abandoned-looking warehouse walls, graffiti drips sadly in the bleak sun, and little bells tinkle as the pushcart vendors ring for the attention of dusty-hardworking folks who might want a paleta or an tamal or elote.

I love the place. I do understand that it's not everyone's cup of tea, though. But I was riding alone. So after getting my morning chores done and laying on some sunblock, I saddled up the old Fuji fixed gear and headed east through Koreatown to the city center. A quick jog south at the Staples Center, then east again on Washington, running alongside the Blue Line trains which run in the street at that point, past Trade Tech College and finally to Alaemda Street, the main artery of the iron heart of LA. I headed south through the aforementioned landscape, enjoying the grumble of commerce and the accidental sculpture of cranes, conveyors, silos, tracks, and hoppers, of compressor arrays and powerlines, of concrete cliffs and sprawls of glittering metal. Southward, ever southward, through Vernon and Industry, cities with resident populations in the low hundreds but into which pour tens of thousands of workers and artisans each weekday; through Lynwood and into Watts, as far as Firestone Boulevard--a street named after an old tire factory. I jogged east on Firestone to Long Beach Boulevard, which would take me through Compton to Long Beach itself.

Now I know what you're all thinking: Omigod, he's bicycling through Compton! Is he nuts?.

Well, I am nuts, but that's not proof of it. Last time I rode through Compton, the most arresting sight I saw was an old Hispanic couple riding their horses down the lane, hand in hand...there's a lot more to Compton than Willowbrook avenue and hardcore rappers (one of whom is a web client of mine. Compton has its problems--not just gangs but an often corrupt city administration (a trouble is shares with the City of Industry earlier on my route), but it's not all hell on earth. Much of it is multiracial, with a lot of Latino and even some white folks along with the majority black population. Much of it has undergone a commercial renaissance since the construction of the Blue LIne light rail line through town some 12 years ago. The people in East Compton, where I was riding now, were the most polite on the road of any I encountered on the ride, and far nicer to this old white bicyclist than the folks I encounter in my daily commute through upscale West Hollywood and Hancock Park.

At one point I heard the roar of a hopped-up engine behind me as I came to a red light. Looking back, I saw a primer-painted Vega with drag slicks on the back wheels, looking like he wanted to turn right. As I usually do, I rolled a foot or left to give him room. As he rumbled by, the young black man inside gave me a nod, a wave, and a gentle smile, then roared west on Compton Boulevard, trailing echoes of his straight pipes and subwoofer for blocks as he drove.

The architecture was unutterably banal, as it would be in most of Long Beach--generic dark beige malls and chain diners for the most part--but the streets were full of relaxed people of all ages and colors, walking along or riding those sad department-store mountainbikes or '70s bike boom relics common among the poor in America.

California State University,Long Beach
I crossed another freeway or two and found myself on wider, freshly-asphalted streets: Long Beach. A couple of hills, some twists and turns, and I found myself on a campus that appeared to be one vast, sprawled encampment of parked cars. I promptly got lost, so called my wife by cell phone; she handed me off to someone else who also wasn't sure that I could get there from here, but somehow we managed it. The central part of the campus was more inviting, the students pretty and lively, the colleagues intelligent and kind, and the lunch adequate. And of course I was with my Sweetie for an hour or so. 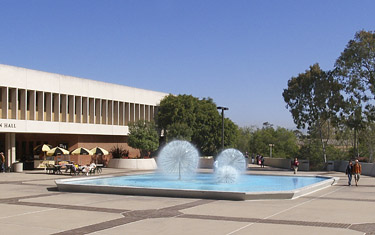 Fountain at CSULB
Leaving the sprawl of campus and negotiating the sprawl of Long Beach itself required more consultations with more colleagues, and two hand-drawn maps. The route took me along wide roads crawling with hurrying cars and heavy trucks for a good while, but once I found Second Street I had the harbor on one side and a series of marinas, all blue and white with boats and masts, prettily seen from road bridges that arched over their channels. My route took me through Belmont Shores, crowded with bicycles and people sitting at delicious-smelling sidewalk cafés--as well as plodding car traffic. I was soon at downtown Long Beach, and after a detour through a shabby part of town by the estuary found my way to the Los Angeles River bike path. 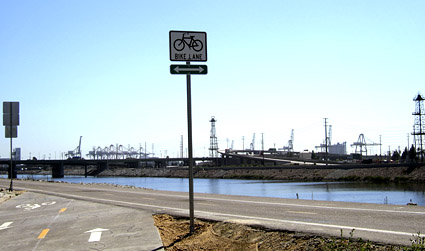 The Los Angeles River Estuary
The Los Angeles River is famous for bleakness, being mostly a broad concrete trench, wide and low here near its mouth, bordered by freeways and refineries through the harbor area, and the backs of factories for most of its course from downtown LA. OF course, I love it, and have photographed most of it repeatedly. I was on the river for just a little while this time, though, as I was looking for Pacific Coast Highway, my straightest connection to the beach, and that was less than two miles away.

Ah, PCH, road of legend: Malibu, Santa Monica, Redondo Beach, surfers and bikinis and sun and blue water...but not here. Here it is a dreary hybrid between street and freeway, feeding truck traffic to the refineries and concrete plants and scrap yards and what have you, arching over railyard after railyard on bleak white concrete bridges that reflected the white sky back in my face and concentrated the sea wind at their crests, just where I would be most tired from pulling the hill.... The landscape of cracking towers, oil tanks, and acres of waiting trucks was broken only by the occasional generic roadside mall, with the usual chiropractors and dentists, small dress shops and computer outlets. I was weary now, fighting the wind and the heat, as it was in the nineties, and after what seemed like several centuries of riding spotted an honest-to-god liquor store where I grabbed a Gatorade and chugged it down. I had left Satchmo, my Fuji fixie, in the store, and when I came back to get him, the clerk was admiring his lugged-steel lines. He asked me how far I'd ridden so far. When I told him, his eyes bugged out of his head. Why?, he asked. Did I need to exercise? "Just out seeing the world," I told him. And it was true.

The next leg of PCH took me between the flat south end of Torrance and the green-clad hills of Palos Verdes, much pleasanter, and soon I was at the beach. 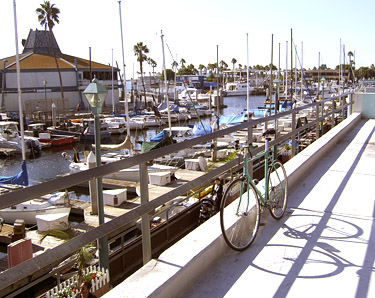 Satchmo resting at Kings Harbor
It was Tuesday, which meant not only more traffic on the streets, but fewer of the lesser Venuses on the sand. No matter: for twenty of the next 25 miles I'd be on the beach bike path, so no traffic but my fellow cyclists, some skaters, and the usual oblivious pedestrians. The sky was clear, with breeze was sweet (and on my beam, no longer dead ahead!), and there were enough people out on this weekday to give most of the ride the festive air I enjoy at the seaside. The bike path is not fast--too busy--but the ride is delightful, and I was tired anyway. I stopped at Redondo Pier for a chocolate-dipped frozen banana--no need to count calories today!--and rested a bit on a promenade overlooking Kings Harbor and the variety of boats and boat folks. Then it was back along the sand to Play del Rey, where I made my traditional stop at the bicycle bridge, where, if you stay long enough, you'll eventually see every kind of bicycle in existence, from full-carbon racing rigs to Dutch cruisers to trashbikes. The bridge is next to the channel for Marina del Rey and crosses over Ballona Creek, and the sailboats in the one counterpointed by the racing shells practicing in the other, all gliding between blue sky and bluer water, make for a pleasant rest stop indeed.

It was later afternoon by then, and the light was golden. I saddled up, zipped refreshed along the bikepath that follows Ballona Creek inland to the eastern border of Culver City, came back out onto the streets a few miles from home, and spun northeastward with visions of hot showers dancing in my head.

Around 80 miles on the fixie, and a day well-spent. And Venus waiting for me when I got back home.