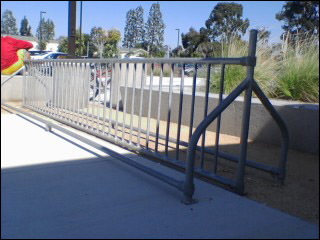 This bike parking rack is at the West City Campus of the San Diego Community College District. It is at 3249 Fordham Street, San Diego, CA 92110-5332. As bike parking racks go, it is a nasty one, a classic old school wheel bender. The thought behind the design goes back decades--to when the vast majority of bicycles built or imported into the United States featured steel rims, nutted axles, and heavy frames. The design goal was to maximize the bikes that could be securely parked in an inexpensive rack by allowing the securing of the front wheels or the rear wheels--whichever the rider could jam in.

And that could be a problem: The large gaps between the bars could fit a nice wide Mountain Bike, BMX, or beach cruiser tire. Typically skinny road bike rubber and rims would leave the attached wheel with lots of play--enough play that the bike might not stay up all that well. The result? The weight of the entire bike would be borne by a wheel pinioned into place by the vertical metal bars of the rack. Wheels are strong--but only when supporting weight vertically. The engineering and statics people can argue whether they're strong in tension or compression, sometimes for weeks on some internet forums. (Reference not provided, but trust me, it happens, and it's not pretty.) However, most bike physics pundits agree that wheels don't do quite so well with torsion, or with twisting force. Most riders who've experienced a "potato chip" (click on link below and scroll down for example) or "taco-ed" wheel would agree.

It was an era that ebbed in the late 1970's and all through the 1980's. That's when such top model features as aluminum rims and quick-release skewers crept down from the stratospherically priced to the more affordable. Even the Schwinn Continental, featuring nicer parts on the heavy Schwinn Varsity frame, had a quick release skewer on the front wheel. I can't give you the specific model year for that specification, but an example is in my sister's garage. Given that history, the only reason this sort of rack would appear in front of a brand new facility are nostalgia and ignorance. Its appearance is a failure on the part of the purchasers to take a look at how people nowadays lock their bikes.

Then, as now, I blame the Italians. Quick releases make sense for competition, but back when the average bike weighed north of fifteen kilograms, wheel change speed was not a premium item. Besides, we rode around our own, known communities. Shoving bikes into a Prius or onto the roof rack to drive to a ride was a bit much. But, again, I note these and other high end features crept down the product lines. I'm not really complaining here--I'm a beneficiary of improved wet weather braking on aluminum rims, the lighter weight of alloy cranks, stems, handlebars and frames compared to steel, and the inexpensive availability of genuinely sturdy platform and "rat trap" pedals. Still, the dominant mode for locking bikes switched from short, light, flexible chains securing a wheel to mutant Frankenstein-sized padlocks securing the frame, or the frame and both wheels. A brief extract from "Wikipedia" (below) explains this development.

The Kryptonite lock was developed in 1972. Before then, the only comparable security available was from a chain, which could weigh almost as much as the bicycle itself. (A common humorous observation in bike magazines at the time was that the total weight of a bike plus chain was constant regardless of cost, since owners of more expensive, lighter bikes would buy heavier, more secure chains.) In the early 1970s the only proven method to secure one's bike was by the use of case hardened security chain with hexagonal links.

Even though the U lock has been extensively available for decades, and is wildly popular, the folks buying these old style racks seem not to have noticed. 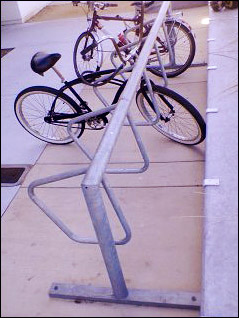 The rack shown here is a far more modern design. It takes into account the evolution of bike locking practices. This includes the "trickling down" of the quick release wheel skewer into non-racing bicycles. It also includes the development of the U-lock as a common bike locking device. It is designed for backing in, but it doesn't pinion the wheels. Bike wheels are much less likely to be twisted with this rack design.

The rack also allows more space between bikes. There are a couple of factors at work here. Like motorists, cyclists don't like to park right next to each other if they can avoid it. An important exception to this is when couples or groups arrive at a destination: Sometimes they park in proximity so they can double up on locks, or use a few locks to secure a multitude of bikes. Each of the descending D shapes allows for parking two bikes, one on each side, for solo cyclists. With such maximal parking, the descending D shapes themselves act as a buffer between bikes. Locking cohorts have a variety of options, including (but not limited to):

One particular feature of interest is the propinquity between these two racks. They are about ten feet away from each other. These two pictures were taken at the same time. You can see that people prefer the newer design.

Lock page from the Schwinn 1974 catalog