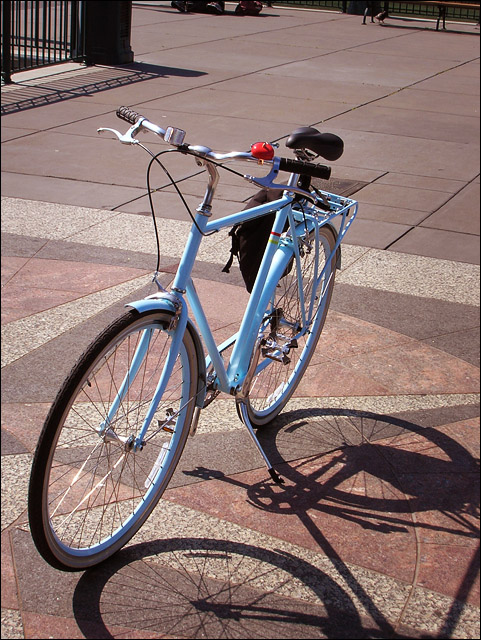 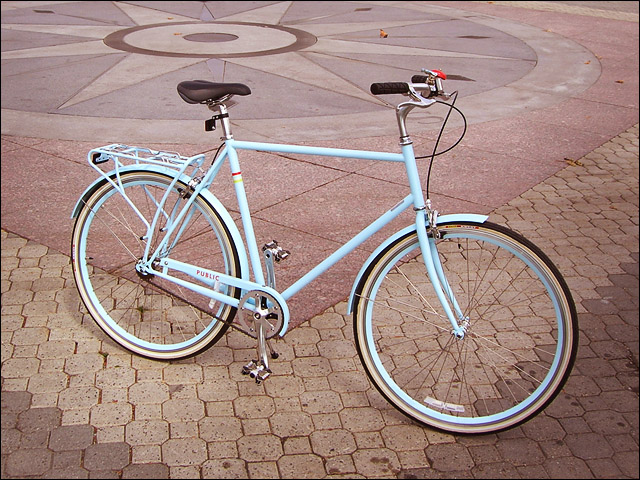 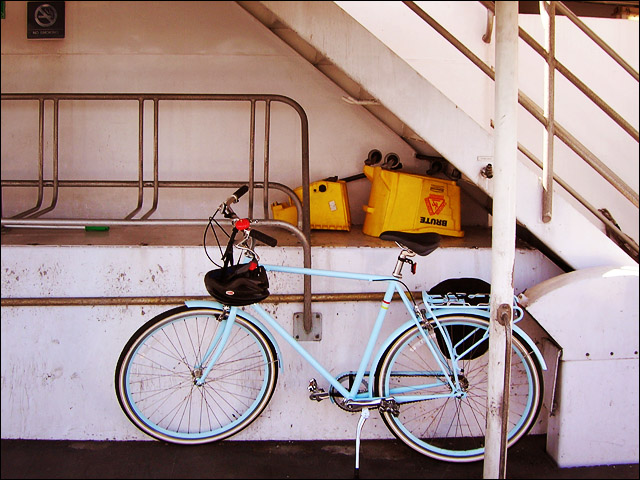 For a long time, I've wanted to review one of the new-generation city bikes offered by a number of American design houses, notably Public Bikes and Linus Bikes, the former located in San Francisco and the latter in Los Angeles. (Both lines are manufactured overseas, as is usual these days.)

The lines are superficially similar, and both take their inspiration not from ponderous Dutch bikes, but from the lighter, nimbler French and Italian city bikes of the 30s, 40s, and '50s, familiar to Americans from movies such as Vittorio de Sica's The Bicycle Thief. (Both companies offer Dutch-styled bikes as well, but they are much lighter than the "real" thing.)

These bikes follow the southern European archetype that Schwinn copied (in its own ponderous versions) and later developed into the American cruiser, which itself was the template for the mountain bike. Diamond frames, with mixte and loop variations, middle-of-the-road geometry, a semi-upright to upright seating position, chainguards, fenders, and front or rear racks, or both.

The first company to respond to my request for a test model was Public, founded by Rob Forbes of Design Within Reach fame after he sold off that company, and since I was going to San Francisco to finish photography for an article in Cycling Mobility, I arranged to pick up the most basic base model, their single-speed D1, to serve as transportation in that busy--and hilly--burg.

So, during a warm Thursday rush hour, I got on the Amtrak bus at the Emeryville train station and stepped off it in San Francisco's Financial District (now inevitably known to locals as FiDi) and walked a mile or so to Public's headquarters in unutterably charming South Park, deep in SoMA. I'd packed half my luggage into panniers and immediately stuck them onto the house-branded rear rack, adjusted the saddle height, and took off on Third Street, plunging thrugh a glittering chaos of cars, all seemingly driven by testy two-year-olds. Really, they made LA drivers seem sweet-tempered by comparison, though no one was particularly hateful to me or the other cyclists present. They treated each other horribly, though, and created an endless interlock of slowly-oozing metal that pretty much only cyclists could get through.

The Public D1, like every other European (or European copy) city bike I've ridden, had very light steering, quite different from the converted stage racer I usually ride. This may be fine if you're carrying your load in a basket, but, while Public also offers a front rack, this particular bike didn't have one. The return to Market Street was a little more exciting than it need have been.

The next day, after giving the bike a good working out in lighter traffic, I pushed the stem down to lower the handlebar considerably; this made the steering more stable, and my seating position a little more efficient both aerodynamically and physiologically, while still keeping me upright enough to stay in tune with the spirit of the bike. I was ready to put it through its paces.

The D1 is, as the name implies, a single-speed, which Dawn Gordon of Public warned me they don't sell many of, especially in San Francisco. But I found the 60" gearing (42x19) to be too easy myself, even on some of the city's famous hills. Then again, I am used to riding fixed in Los Angeles, a city that has plenty of hills of its own. In any case, fixies and single-speeds seem to comprise at least a quarter of the bikes I saw on San Francisco streets, so I felt I would be in good company on the test bike.

Offsetting the lack of gears was the bike's fairly light weight. Despite bearing fenders, chainguard, kickstand, durable Kenda Kwest 700x35C tires, and a beefy rear rack, the bike did not feel heavy, and indeed the specifications claim a (rackless) weight of 26.5 pounds. Friday morning saw me clipping the camera bag to my belt and heading west on market, with an ultimate destination of...Sausalito, on the other side of the Golden Gate.

My photographic task was to snap pix of bike infrastructure all over the Bay Area, and so the bike was in for a workout. With territories to explore in SF, Sausalito, Oakland, Berkeley, and Emeryville, and a commutment to use ferries or BART only to cross the bay, I knew I was pushing the envelope for this particular model, but...it did quite well.

I followed Market to the Wiggle then wound my way through Panhandle Park to Golden Gate Park on the first leg, but didn't encounter too much in the way of hills till I followed Arguello back to the Presidio and the Golden Gate Bridge.

The bridge itself met me with a cold fog and a roaring wind (in San Francisco the weather can change radically within a mile, especially if you're moving east or west), and the radical descent for the crossing under the bridge had me worrying a bit about the return. Sunny Sausalito, a hefty Italian sandwich, and a beer, followed by a bit of pedestrian sightseeing, set me straight, and after grabbing a few more shots with the camera, I headed back towards the Golden Gate.

If you know the road out of Sausalito, you know the short but daunting climb you encounter as you leave the city limits. I am happy to report that the D1 proved no impediment there, as I passed a roadie on a titanium bike on the way up! Nor did the climb back to the bridge cause any particular distress.

Back in San Francisco I egded around the Marina to Ghirardelli Square, with its cobblestones and streetcar tracks (and tourist buses, and the hordes of dazed tourists they had disgorged); once again the ride was uneventful, and I was soon back at the hotel and ready for another meal.

Friday was East Bay Day, when I would be shown about by former LADOT staffer and good friend Chris Kidd, now of Oakland. I put the D1 on a ferryboat for the morning crossing, and discovered one problem--which was not the D1's: the bike racks on the transbay ferries don't accept bikes with fenders. In a rainy city such as San Francisco, this is absurd. But it is what it is, so I wedged the D1 behind a post and settled down for the ride.

As it turned out, said wedging had bent the chainguard slightly, causing a "tick" as the pedals turned after I got off in Oakland. Easily fixed by thumb-power.

The East Bay sprawls a great deal more than SF, so I put on a good many miles as I followed Chris around surveying and photographing bike lanes, bicycle boulevards, wayfinding signs, and sharrows. Neverhteless the bike did fine, and Chris didn't have to restrain his pace too much despite his road bike. (And he is every bit as strong a rider as I am, if not stronger.) Our path resembled the convolutions of a printed circuit board as we crossed from city to city and back again chasing stripes and roundabouts, so a beer by Lake Merrit served as a most approriate end to our peregrinations.

My wife was also in San Francisco, as she'd had been commuting up there by plane during the week for a corporate training contract, and as Saturday was her birthday, the bike got to rest.

But Sunday we rented another bicycle for Gina, and together we reprised Thursday's route, minus the Golden Gate Bridge but with a much longer wander in Golden Gate Park.

San Francisco had been gaming us by serving up fine LA-style weather for the most part, but the Presidio is always foggy and its roads damp, so I did get to test the fenders in a puddle or three. Despite the front one being really quite short, I never suffered wet shoes. Monday saw heavy clouds and a forecast of rain, so I packed my cape into the pannier and rode off to the Mission to visit one friend, and then to Noe Valley to visit another. It rained on and off as I rode back towards SoMa to return the bike, though never really enough to merit digging the cape out. But the roads were damp, and brakes, tires, fenders all did their jobs. Ireturned the bike to Public wet but otherwise unharmed, bought one of their charming little bells to put on my own bike back home, and ambled off.

What do I think of the Public D1?

It works. Despite the paces I put it through, it's not a long-distance bike--too upright, too laid-back--but it's not meant for that. It is a short-hop commuter, shopping, and bar-crawling bike, and it works very well indeed for all that and more. it's very handsome too--at least two strangers went out of their way to compliment me on my "beautifully restored vintage roadster"--and the house-brand grips, seat, and pedals were all more than adequate. I wouldn't buy one myself, living where I do now, as I use my bike for longer rides, while most shopping is wthin walking distance. But in most other neighborhoods, I'd keep a D1 or something like it (knowing me, probably an actual restored vintage roadster) for local riding. Equipped with front and rear racks, the D1 would be able to haul an awful lot of stuff (and I kept at least one loaded pannier on it for all my riding), and it's an easygoing, comfortable machine, very likeable. Bad roads don't bother it, and it can get you up the hill or across the city in a pinch. I liked it much more than the Dutch bikes I've tried, and it's less than half the price. (Yes, it's not made in the US, but neither are Dutch bikes--which are often not made in Holland either.)

Would I recommend it? Without question yes, I would. If you want a good-looking, competent, comfortable bicycle for local riding and shopping--say, within a four-mile radius--the Public is an excellent choice. And it's available in 3- and 8-speed internal gear versions, as well as mixte and faux-Dutch stylings, and some derailleur versions as well.