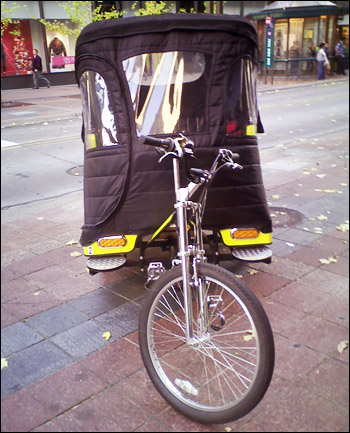 A few weeks ago--this was deep in a Minneapolis winter--I was working my pedicab on 1st Avenue, the main bar area, about 12:30am. I pulled up to the curb by a bar that had a number of people waiting to get in lined up outside. One attractive young woman walked over to me, pointed at my fully enclosed and winterized cab, and asked, "Has anyone ever had a quickie in there?"

Knowing that she had been in line with her boyfriend and wanting to prolong the fun I replied, "No, but you could be the first." She was thrilled at the response and went back to the line to tell her boyfriend what I had said. He declined to take advantage of the opportunity--apparently preferring public inebriation to physical intimacy in a pedicab.

About fifteen minutes later I was heading the other direction on the same street about half a block away. Three girls flagged me down and asked if I would go as far as Dinkeytown, an area about twenty minutes away. I agreed and they boarded cheerfully.

I started off and one young woman unzipped the door a little so she could stick her head out and hoot to her friends on the street. As I progressed through the bar area, the three women were a-hootin' and a-hollerin' up a storm and a bouncing all around, easily taking the prize for the noisiest riders I have had.

I rode down a quieter street for a while, and suddenly things got very quiet in the back. I keep a couple of blankets in the cab and one of them found its way to covering all three women. When the time came to drop them off, I got off the saddle, unzipped the door, and helped the first girl out, then leaned back into the cab.

The girl in the middle was passed out with her head between her knees. Hoping that she had not thrown up, I quickly inspected the floor of the cab. It was OK, so I asked the first girl if the middle girl was OK. With a joyful affirmative, the middle girl roused herself from her stupor and I helped her out.

At that point I couldn't help noticing that the third girl, despite the temperature, had her jacket open...and her blouse open as well. I don't mean unbuttoned, I mean completely open!

I politely turned my attention to the other two women while number three drunkenly managed to rearrange herself. They tipped me well, and each of them thanked me and gave me a hug for good measure. Once number three was done, I helped her out and she gave me a big thank you, several hugs, and a peck on the cheek.

Apparently, these three women were the first to have a quickie in my cab--and they appreciated the opportunity.