Out of the Fog: San Francisco After the Injunction

San Francisco has long been a cycling city, at least by US standards, even though until recently there was as little bicycle infrastructure there as anywhere else in this country. In spite of hills and narrow, crowded streets; in spite of choking motor traffic, bike-unfriendly transit, and a chaotic street layout; in spite of cold winters and often colder summers, and fogs that make a mockery of sweaters, San Franciscans cycled on, developing a proud and persistent bike culture long before bikes were ever hip. Portland beat it to the punch in placing bike lanes, bike corrals, and all that, and that has sent its bicycle mode share soaring...but one wonders where San Francisco would be now if a single citizen hadn't stalled its entire bike plan for four years with a notorious lawsuit that was ultimately thrown out of court.

As it is, San Francisco was a city of bicycles when we went there last month. We of course did not make a comprehensive survey of the number of riders, but it seemed to us that the density of bikes in use for transportation was higher than it seemed to me in Portland in May of last year. (San Francisco is more densely populated than Portland, though the two cities are about the same physical size.)

What we did do is take photographs of the city's bicycle infrastructure old and new, and of some of its riders. Here they are below--a portrait of San Francisco cycling in the fall of 2011. 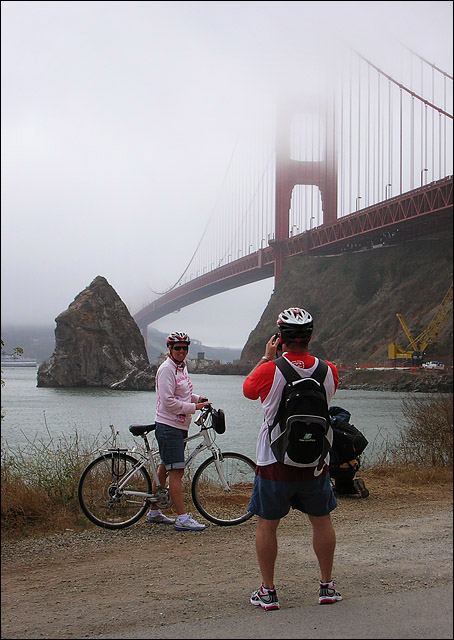 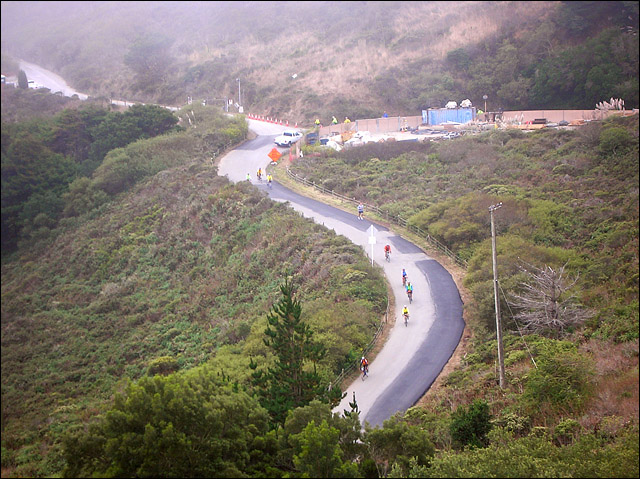 Getting up to the bridge from Sausalito can be a workout. 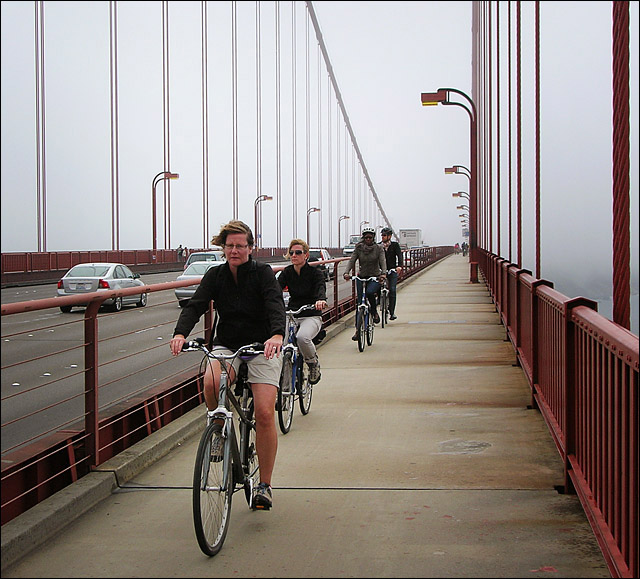 And crossing it can be a cold and windy pedal! 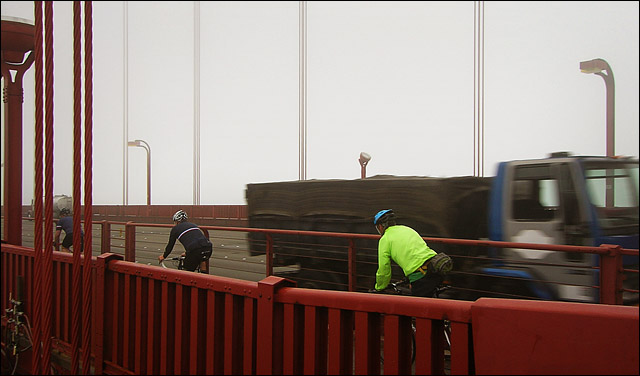 Traffic roars by just inches away. 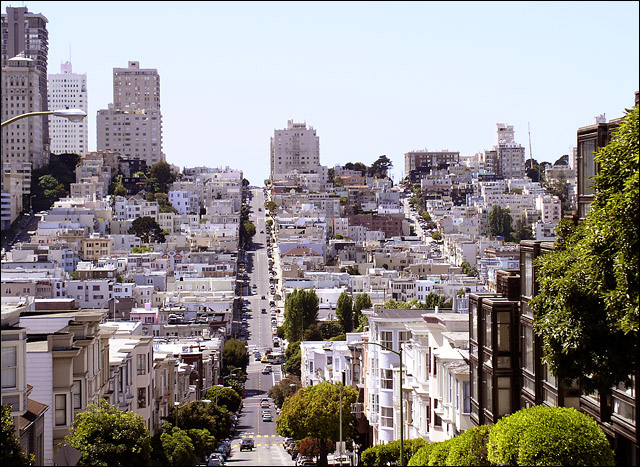 Once across, you face the city's legendary hills. 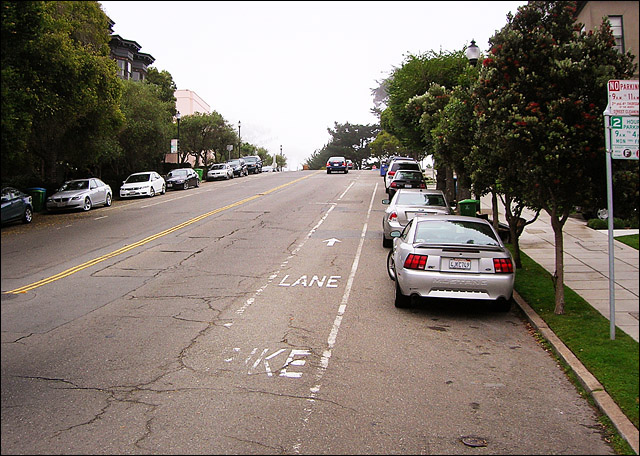 Some of which, such as this fairly gentle one on Arguello, you simply can't avoid. 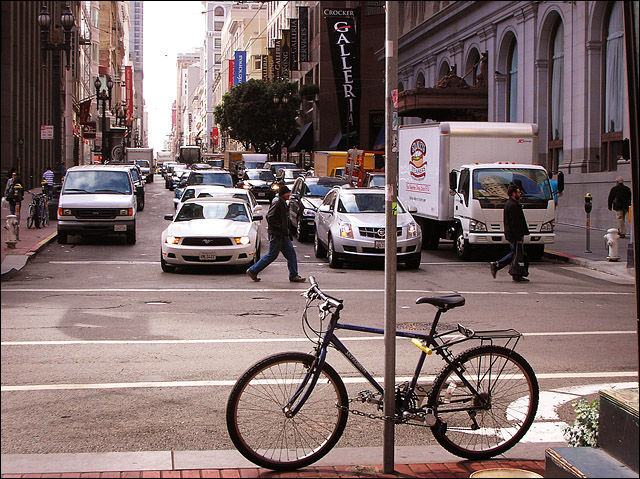 Then there's downtown traffic in a city designed before cars. 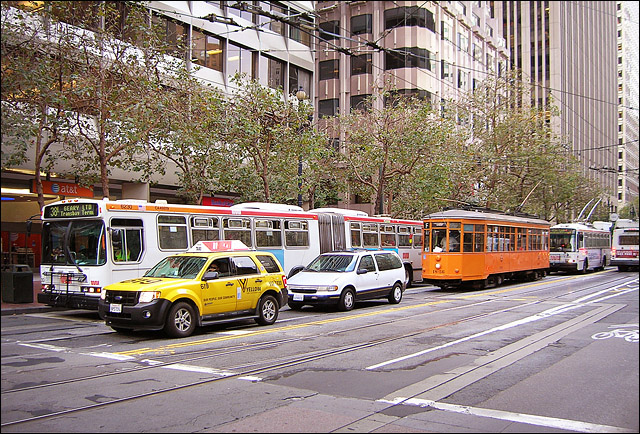 As well as transit vehicles of half a dozen types. 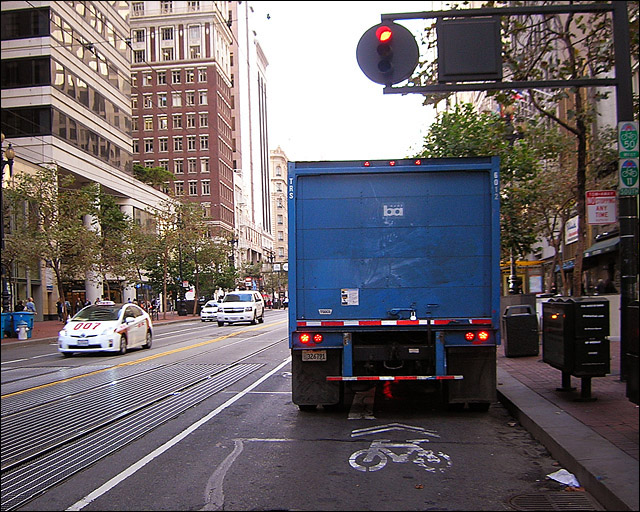 And, of course, the mandatory bike lane blockades.... 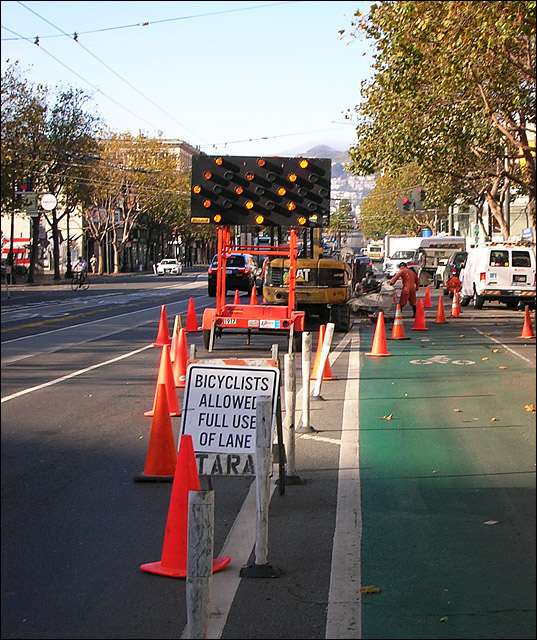 Which nevertheless can be implemented thoughtfully. 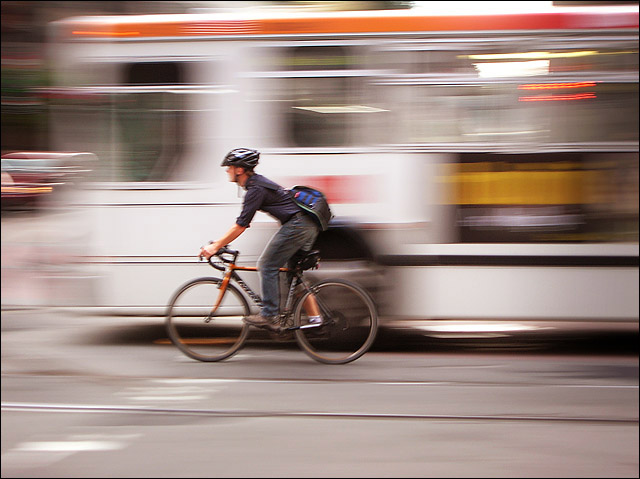 Sharing the road comes naturally after a while. 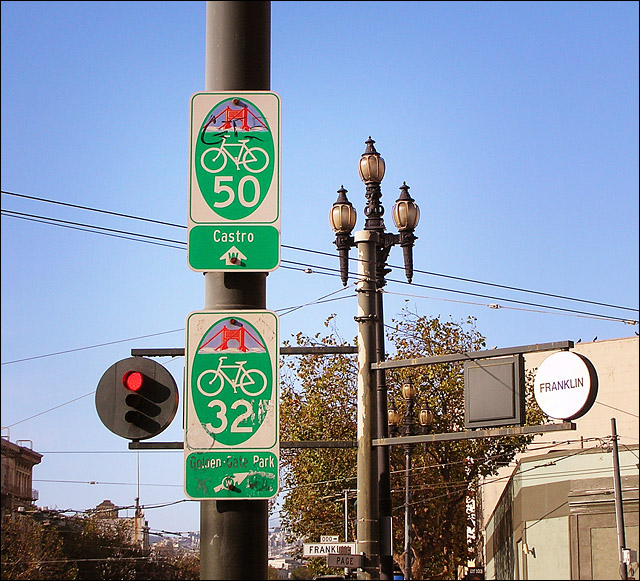 And quality wayfinding makes getting where you're going much, much easier. 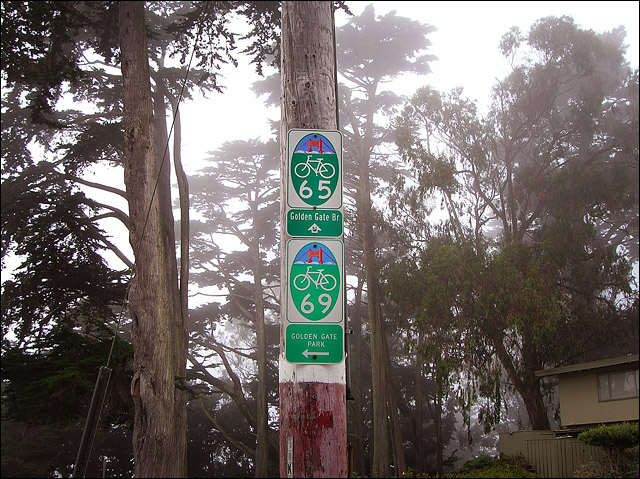 Cyclists aren't neglected in the Presidio, either. 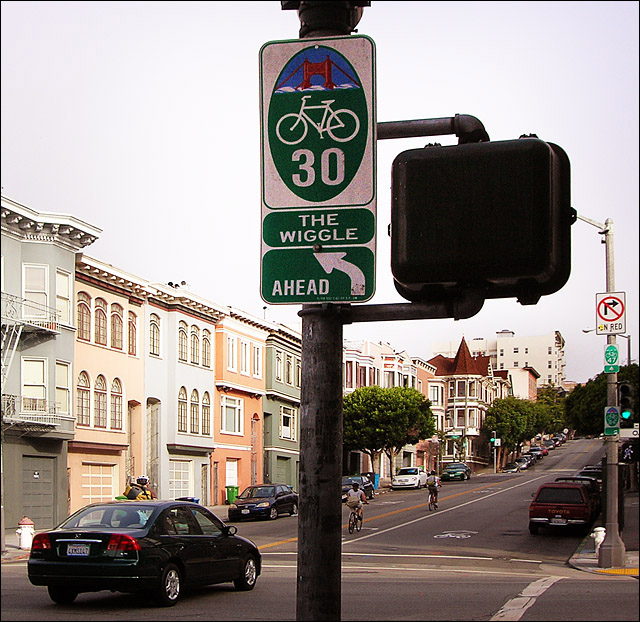 While the ages-old "Wiggle" gets its own official signs! 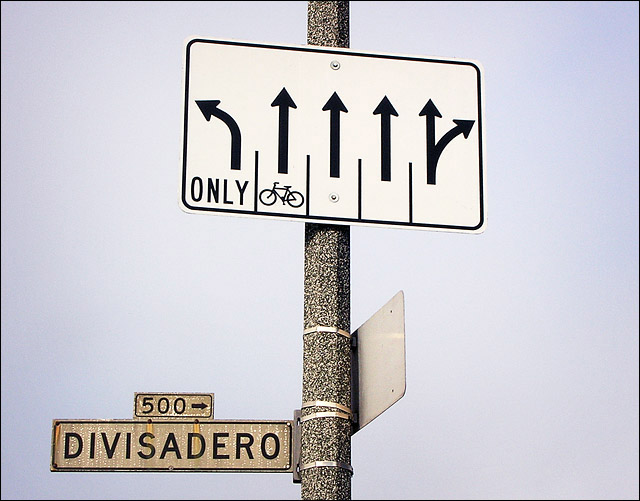 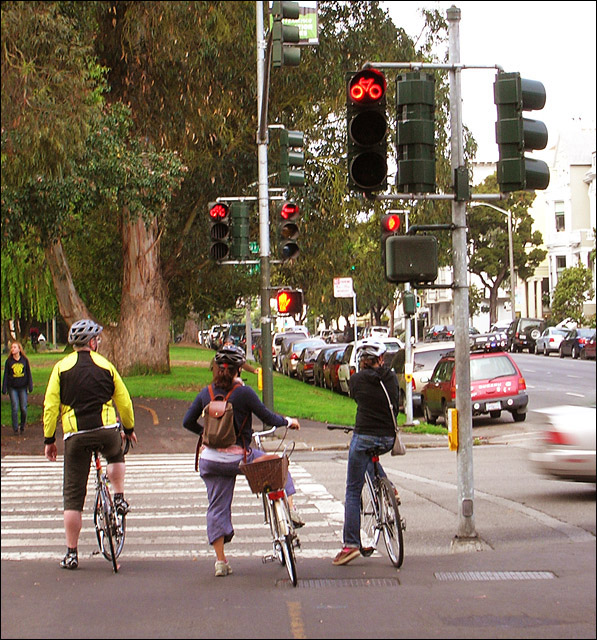 There are bicycle traffic signals where road layouts warrant. 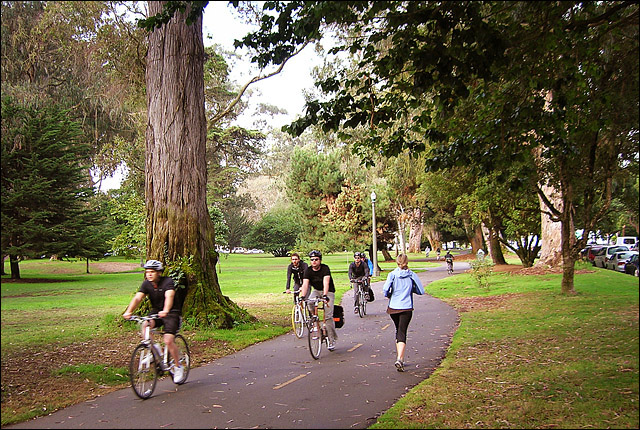 As well as a number of off-road paths where there is room. 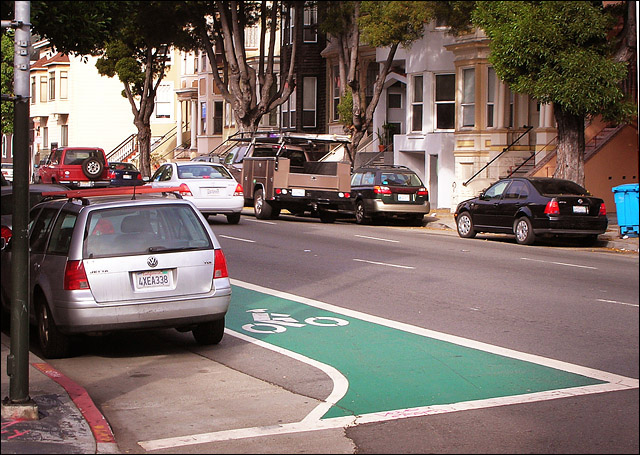 Even a green lane or two, as here on the Wiggle. 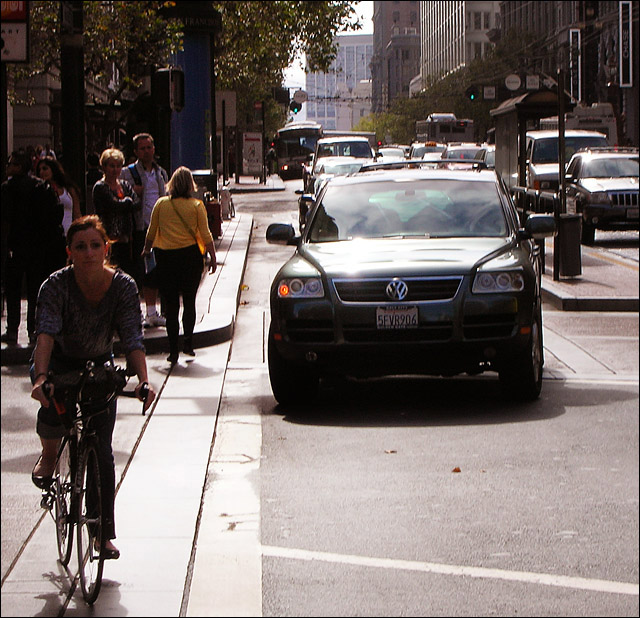 And so cyclists come out of hiding.... 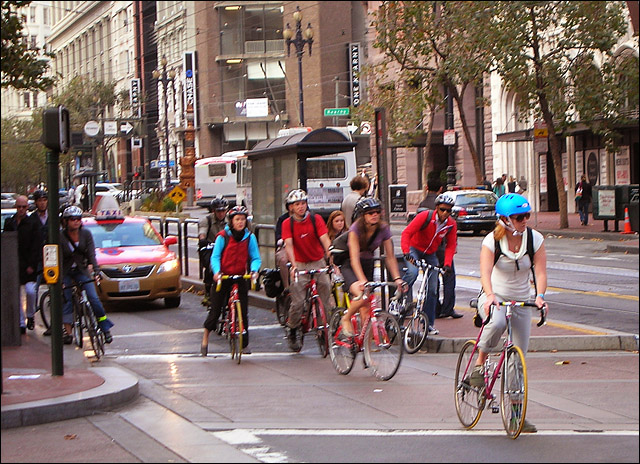 Phalanx after phalanx of cyclists.... 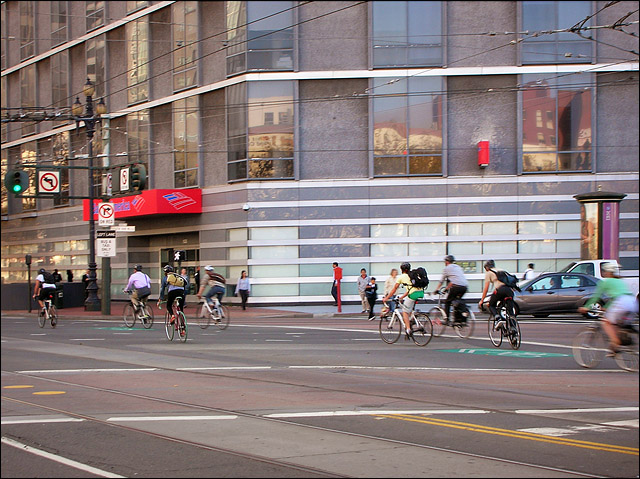 Riding to work at rush hour.... 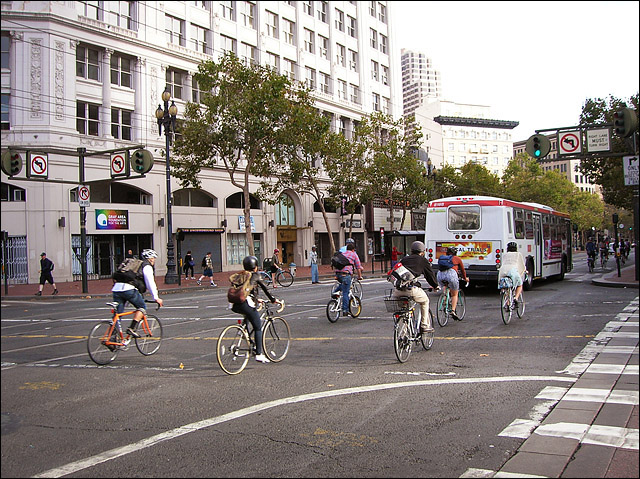 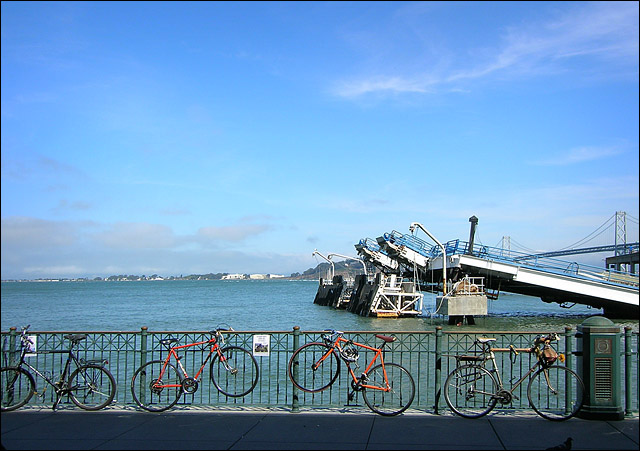 To the point that it's sometimes hard to find parking, as here, despite 66 bike rack spaces nearby.

Downtown, the Mission, Golden Gate Park and the Presidio, Noe Valley, the Haight, the Embarcadero, even SoMA (the most car-dependent part of the city): everywhere we went, we saw bikes and cyclists, few of them in Lycra, all of them going somewhere. We saw their bikes parked at shops, restaurants, bars, offices, apartments, parks, hotels...everywhere.

Who knows? San Francisco may well become America's capital of cycling in a few short years.

Guess we'll have to keep visiting to see what happens!