CicLAvia: A First for Los Angeles
"Joyous" and "cheerful" are words only rarely reserved for excursions into the boorish arterials of the Los Angeles street network, but today, thanks to CicLAvia and tens of thousands of cyclists, walkers, strollers, standers around, and more, they applied.

On October 10th, 2010, Los Angeles held its first ciclovía, an event that originated in Bogotá, Colombia, over thirty years ago, when the city began periodically liberating certains treets from car traffic every Sunday so that people could mix togher as they bicycles, walked, danced, sat around, made music, picnicked, whatever. It transformed Bogotá, and from the exhilarating success of today's CicLAvia, it may just transform Los Angeles too. 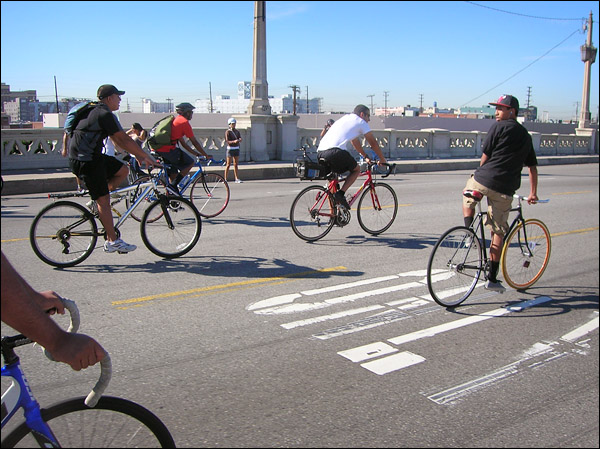 From hardbodies zipping through the crowds, endlessly threading the needle on track bikes and roadracers, to stately matrons on their step-throughs, to the tattooed love boys cutting capers on their neon fixies in every eddy and backwater of the rolling bidirectional river of velocipedal love; to the handbikers and wheelchair pushers and stroller pushers and girls on cruisers and tallbikers and chopper jockeys and 'bentriders and tandem teams and Spandex superheroes and little old men and ladies; to the the bands and DJs and food trucks and more, it was an epiphanic few hours of open humanity rolling together under the October skies, free and easy and happy in each others' company...we were there!

The LA Times reported the throng at over 100,000 people, but being that they were not in cars, there was plenty of room; the fast could go fast, the slow could go slow, the strollers could stroll, the music lovers could stop in the street and listen to the sounds. It looked to my eyes that nearly half of us were women, and there were lots of Latinos, I heard lots of Spanish being spoken, saw lots of youth, lots of little kids. No need to shout over traffic, no need to rush, no need to fear.

It was a sweet dream of people just being happy together out of doors, the streets a lively, quiet park, the colors bright, the conversations easy--only it was no dream. It was real.

Scroll down and see for yourself. 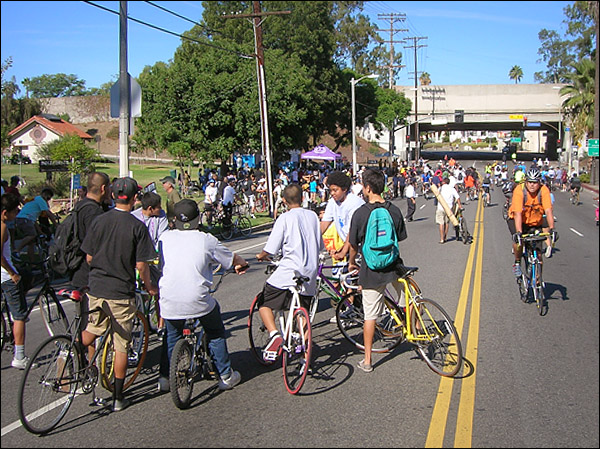 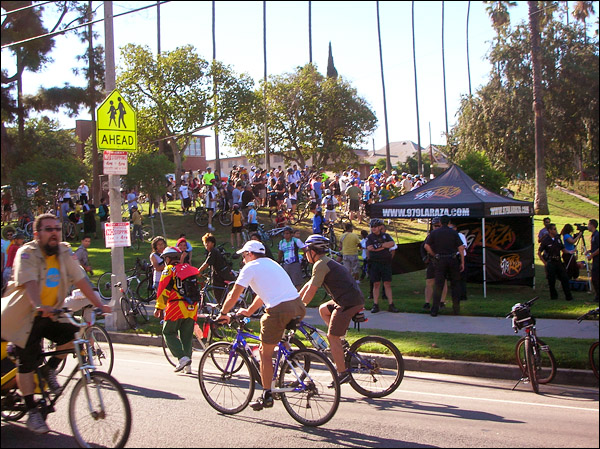 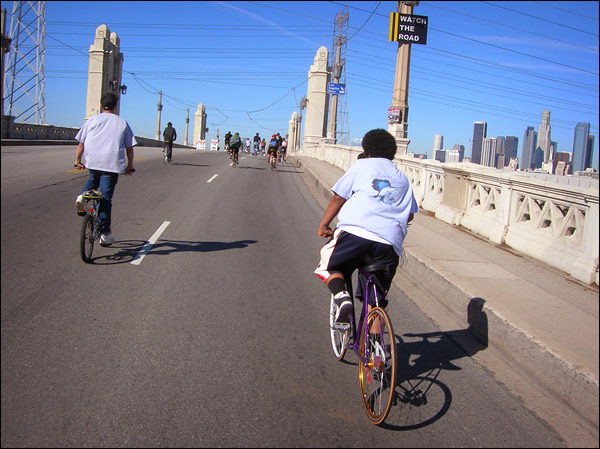 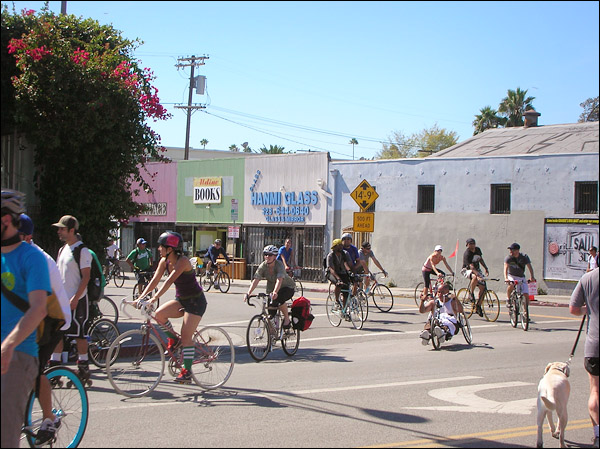 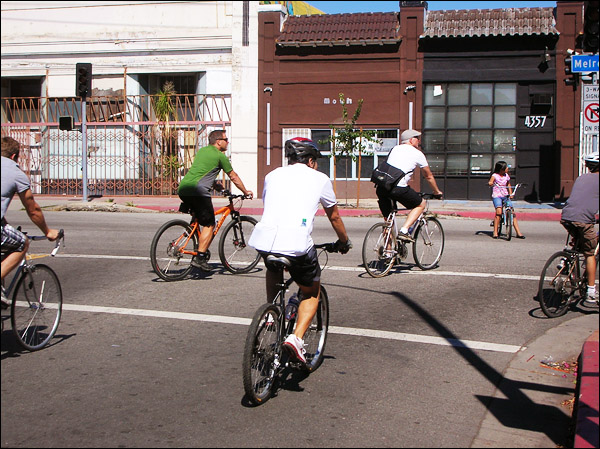 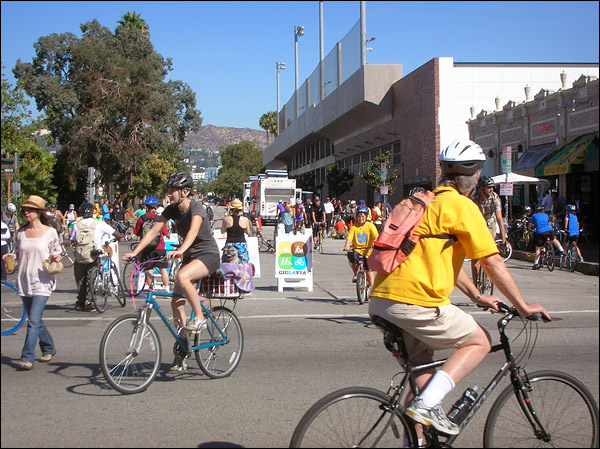 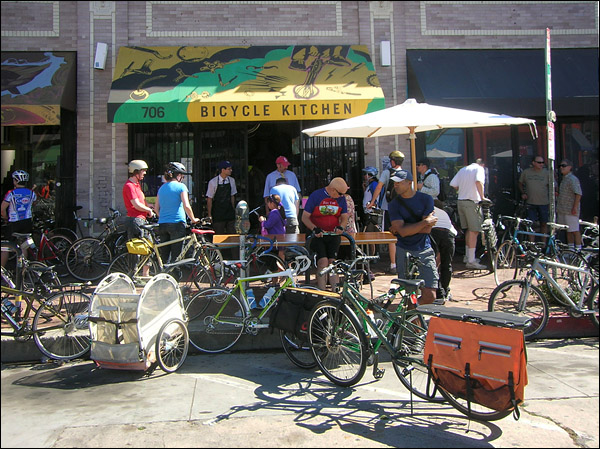 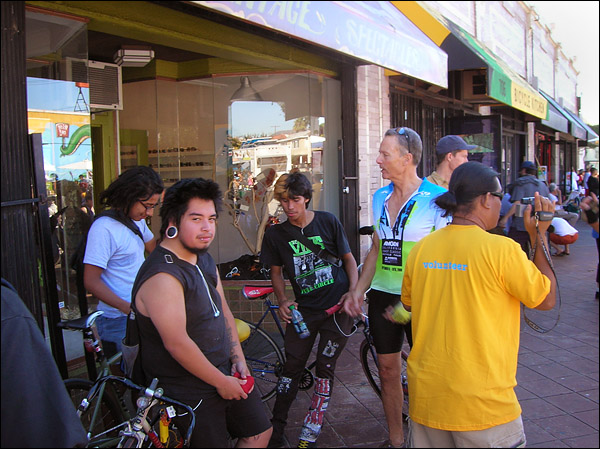 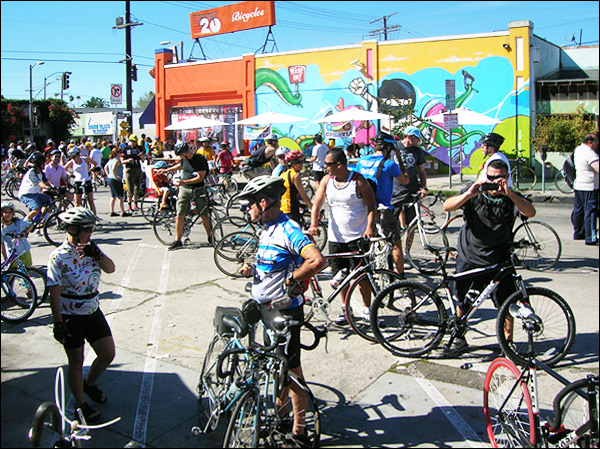 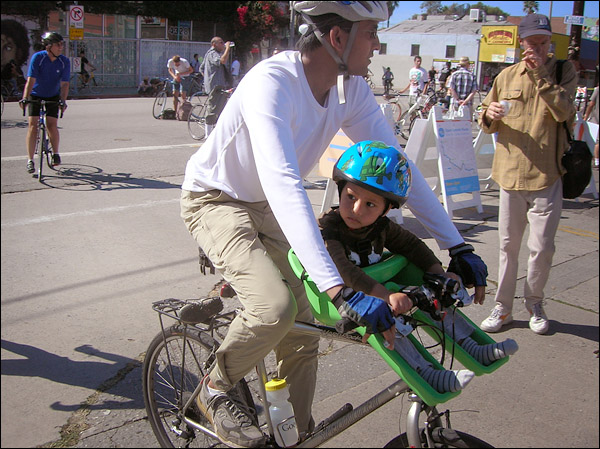 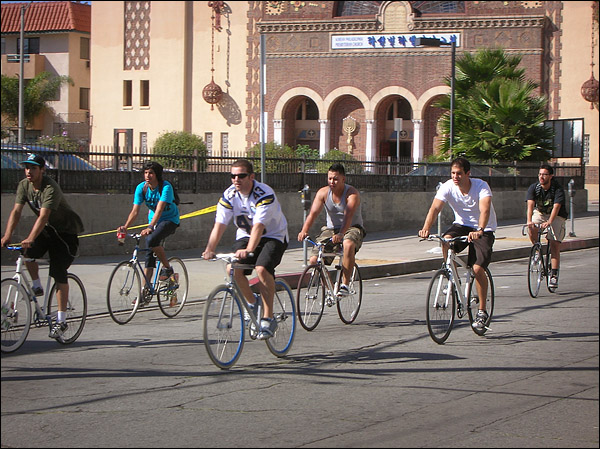 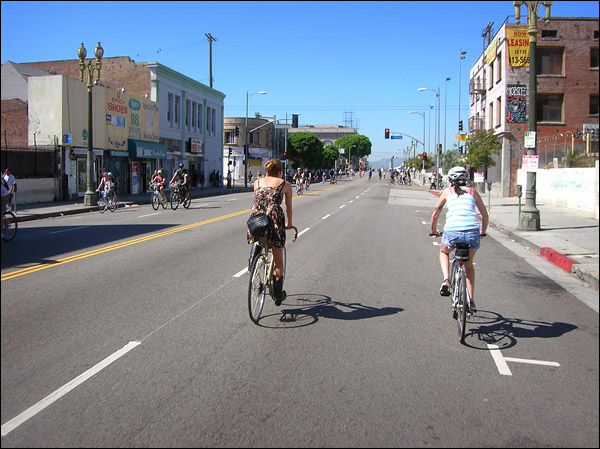 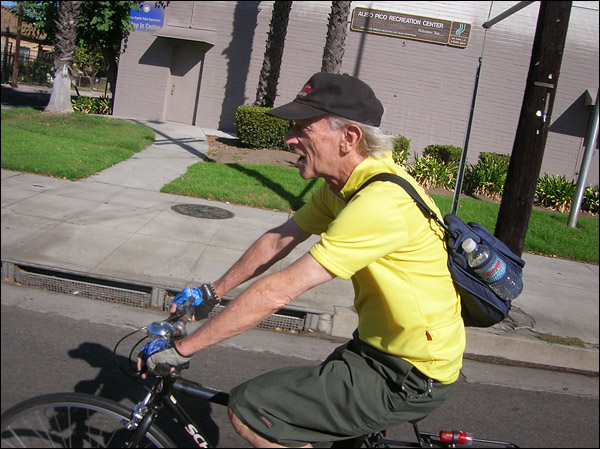 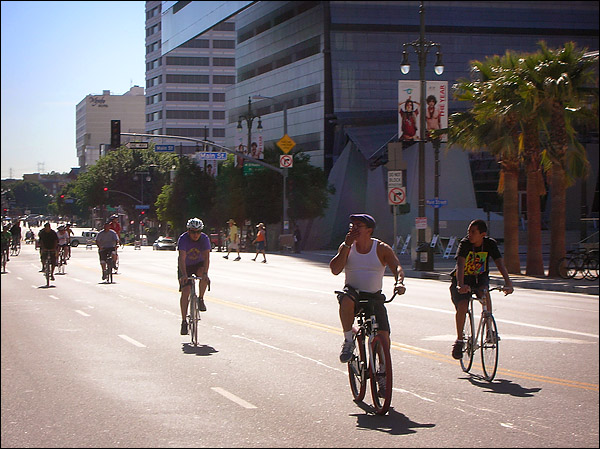 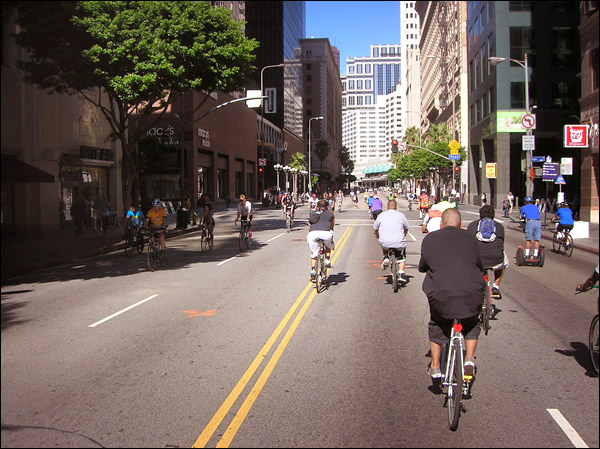 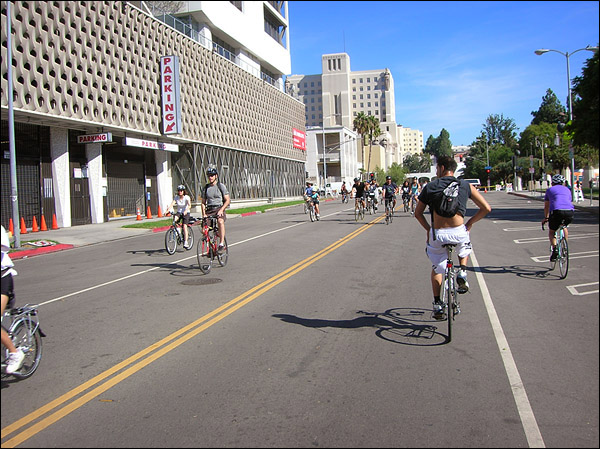 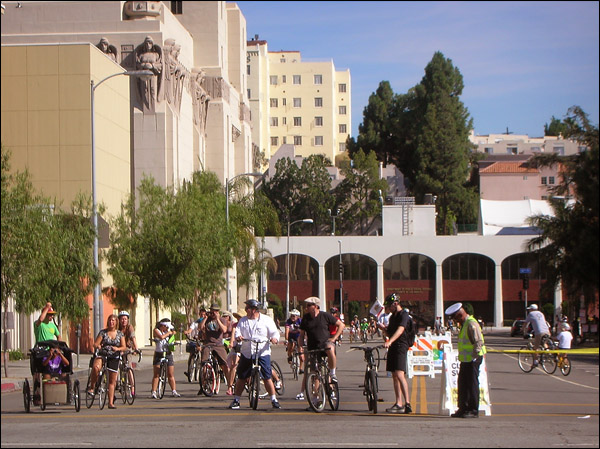 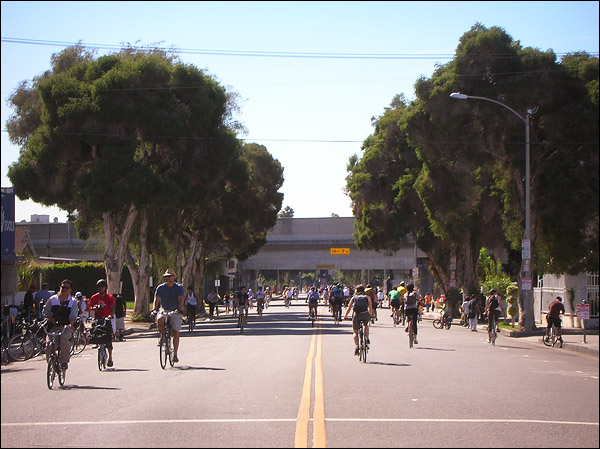 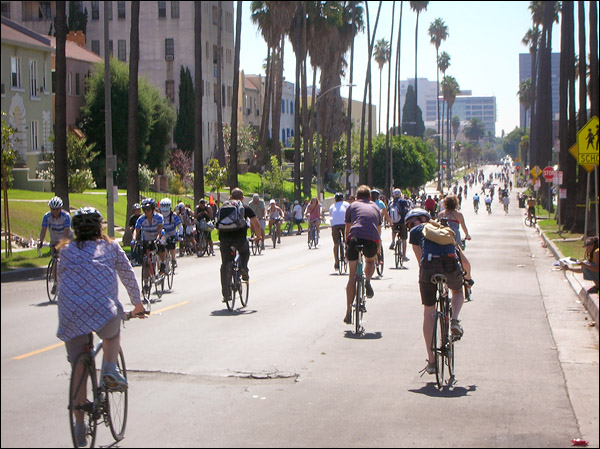