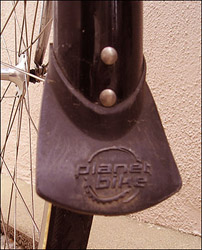 Metal fenders have become all the rage in the last few years, as the increased interest in the 650B wheel size has spilled over into all things velo-French. Honjo of Japan makes sturdy and beautiful French-style aluminum fenders, Velo-Orange makes their own version of Japanese-style French-style aluminum fenders, and Gilles Berthoud makes actual French fenders, in France, and out of stainless steel.

All these are excellent products: Gina's nickel-plated Miyata, the famous Vivian, now sports stunning Honjo hammered fenders; my Green Gopher shopping bike just received a pair of Velo-Orange smoothies; and under the bed lies a set of Gilles Berthouds, waiting for the perfect project bike.

For a while, I thought that that perfect project bike would be La Bambina, the faithful Bottecchia fixie on which I put most of my miles these days. I was delaying because Gina insisted that any fenders mounted to La Bambina be black, and I did not want to spend the money to powdercoat the Berthouds just now. And besides, La Bambina already has a pair of fenders, even if they are but lowly plastic ones from Planet Bike, which I had installed temporarily till I could do better by her.

In fact, I had actually put them on her predecessor, my old Bridgestone 700 road bike, which I reluctantly sold because it was just a tad too small. 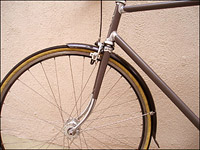 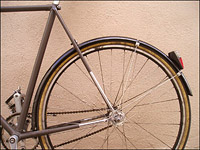 Last week, I realized that these "temporary" fenders--bought cheap from Hollywood Pro Bicycles, out of the package and possibly a return--had been in use for a good ten thousand rough miles by now, and were still going strong.

I'd used plastic fenders before: a set of execrable Zefals on Gina's old Bridgestone XO-2; a pair of very nice ESGE/SKS chromoplasts on a Bridgestone RB-T that I rode for many years. However, the SKS fenders were actually a laminate of plastic and aluminum, so perhaps shouldn't count.

I have an affinity for things that last, so I assumed I'd eventually put Berthouds on my bike...but, while waiting for the time to come when I could comfortably spend the money for them, I seem to have proved that the Planet Bike fenders are quite durable themselves!

So let me give them a brief review:

Why is polycarbonate in both columns? Because although it is nearly unbreakable, it is made from petroleum in a high-energy process, so more damaging to the environment than metal (especially steel) fenders. 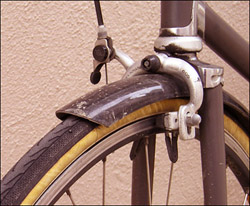 Also, since polycarbonate won't bend, but always springs back, you cannot make minor adjustments to the fender line by tweaking, denting, and bending.

Then again, these fenders have been leaned on walls and poles, jammed onto crowded trams, wedged into elevator corners, and otherwise dropped, bopped, and banged, and are none the worse for it. They are also easily strong enough to hold my fender-mounted Spanninga SPXb taillight, which has been on there for several thousand miles itself.

The stupid little mudflaps are another story. They do absolutely nothing...nothing. No, I'm unjust: they do cause toe-clip overlap that otherwise wouldn't happen on my bike. They are bad enough that Planet Bike has recently released a new fender, called the "Cascadia," with real mudflaps on it!

I'm hoping they also improved the plastic sliding clip for the rear fender, which is strong and handsome, but tends to rattle over big bumps, as it cannot be squeezed tightly over the fender as a metal one can.

(Note: the plastic clip broke at about 14,000 miles, but the fender was strong enough to stay on without it for another few miles till I got to where I was going. Once there, I secured the fender with twine for the twenty-mile ride home. The next day, I took a spare metal clip from another fender set, spraypainted it dark gray, coated it with Plasti-Dip, and put it into service. Much quieter now!)

The chainstay-bridge mount clip--a spring clip--is another bad idea. It lets go on bumps, which allows the fender to slide backwards in its brake-bolt clip. For a while I blocked the movement with gaffer's tape, but in the end, I simply broke off the clip and ran a small bolt through the hole (fortunately) provided underneath. I know some bikes don't have a hole in the chainstay bridge; if yours is one, just use a P-clamp to attach the fender--don't count on the spring clip.

Even if you do have to break off the spring clip and use a bolt, mounting these is too easy: a fifteen- or twenty-minute job. I have installed many fenders over the years, and these were the easiest by a large margin.

They are a little short, especially the front one, but they do work well: I've ridden them through three rainy seasons now, including one comprising repeated torrential downpours, and over numerous puddles and streams in water-wasting LA; with the larger mudflaps PB now offers, they would be perfectly functional.

Another plus is that Planet Bike donates a portion of its profits to bicycle advocacy groups.

So, despite my litany of minor complaints, I have to say that the Planet Bike fenders work really well, look good, and are solid and reliable.

I suspect that these "temporary" fenders will probably be on the bike for another ten thousand miles. Not bad for thirty bucks!