We all know about Velcro®, a registered trademark of Velcro Industries B.V. Generically called "hook and loop fasteners," these little straps and patches, inspired by cockle burrs, have been used for years now in place of buckles, zippers and laces on any number of clothing and luggage items.

The cycling accessory and clothing industries have not been immune to this trend: hook and loop fasteners can be found everywhere--from rain jacket cuffs to reflective ankle bands, from pump straps to panniers. We all know how this stuff works, and many of us routinely use hook and loop fasteners when we ride. Unfortunately, many riders who would benefit don't think to bring some extra ones along.

I'm not advising all and sundry to put fuzzy, prickly patches on all over their bikes. What I'm suggesting is adding some simple straps to your usual commuting and shopping bike's toolbag. You'll be surprised how useful they will be for occasional special loads and unusual bike management tasks. 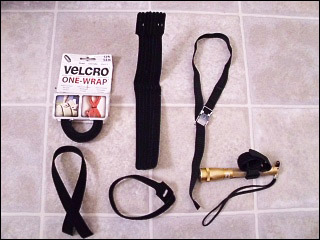 Unlike hook and loop fasteners built into a bag or jacket, a strap is just a strap. Take a look at the picture: on the lower left is a short length cut off the famous maker hook and loop roll pictured on the upper left. This has all loops on one side, all hooks on the other. The lower middle strap is basically the same, but features a slight refinement: a simple slot for threading the tongue of the strap. Double-sided hook and loop fasteners like these are often sold in hardware and computer stores for bundling electrical cords, hoses, and computer cables.

The right side of the photo is devoted to examples. On the bottom right, a commercially available flashlight and handle bar mount, consisting of molded rubber block and two hook and loop straps with little plastic buckles. On the upper right, a spring-loaded buckle strap is shown. Such straps can be used in place of hook and loop straps for many of the functions described below. 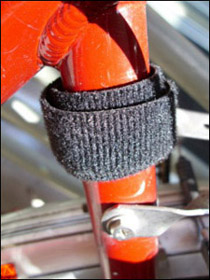 You don't even need a toolbag, really. A simple, short hook and loop strap is easily and unobtrusively wrapped around your seat stays! Here, between seat post and rack attachement, this strap is happy to wait till it's needed. Turn the hook side to the inside. This keeps the strap from accidentally grabbing clothing, or gathering dandelion fluff.

We may all think we know how to ride our bikes--and most of us do. It's when we've stopped and dismounted that we've got problems with bike management. They're always rolling forward or flopping about in racks. On public transport, the darn things start rolling at the most inconvenient times. And anyone who hasn't had their bike try to get away while they were loading groceries into a basket or pannier probably hasn't been shopping with a bike that has baskets and panniers.

So, one solution is shown here: a pump strap is holding this bike's handbrake lever in the "stop" position. This will help keep the bike from rolling about while stopped. You can also simply wrap a strap around a wheel and a frame or fork tube to hold your bike steady. 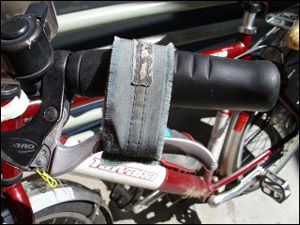 This works wonderfully on transit as well. For example, the San Diego Trolley is remarkable, although not unique, in having no securing straps or racks for the convenience of bicycle users. Simply stopping just one wheel from rotating makes the bike easier to control with one hand while you grab onto a railing or stanchion with the other. It beats leaning the bike against a row of seats, especially with security on the alert for greasy marks on their nice upholstery. I've also used every strap I had in my possession when a kind-hearted commuter rail conductor told my riding group to just fit our bikes "there." There was indeed a space for bikes--with only three working security straps. Rather than have some of our seven bikes roll loosely about the rail car, or have them flop about and fall over, we strapped otherwise unsecured bikes to the lucky few that had been "officially" secured.

Everyone occasionally needs to carry something that won't fit into a pannier, or for which there is no room left in the pannier. Straps can help mount ungainly or unusual loads to the rack. Sometimes I've even used the length of the top tube as an extension of the rack for the most awkward of loads. Relatively light times I've carried with hook and loop straps include: 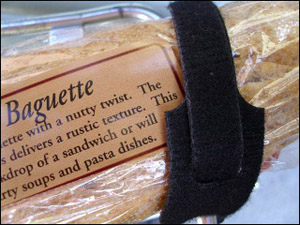 I'd like to note here that hook and loop fasteners, although quite adaptable, are not the strongest of attachments. Hook and loop fastners can wear out over time: the tiny "hooks" get blunted or broken, the little loops pull out or break. Nevertheless, they remain an excellent way to expand the utility of your utility bike. Give it a try!