I spent a rather mobile childhood, riding my bike all over my various neighborhoods in Pennsylvania, California, and Oregon. By the time I entered high school I was riding to and from school nearly every day, a round trip of about six miles. This was in the late 1970s, after the oil crisis had ended and everyone had gleefully gone back to driving except me. I loved the freedom and ease of bicycling so much that I put off getting a drivers license until my twenties, and by the time I was 30, I'd decided to live car-free for the rest of my life.

I also spent most of my childhood making sure I knew where the bathroom was wherever I went: the mall, the beach, the grocery store, my school. I got good at developing a sweet, innocent disposition that would melt the heart of the most hardened shopkeeper so I could use the restroom. I had to develop these skills because I had to go to the bathroom many times a day, for reasons that were never diagnosed until I was an adult. I assumed it was normal for me and simply lived with it, until things got so bad that I could not eat without experiencing great pain. I went to the doctor and asked for help. It took many weeks of tests and more pain before I got an answer.

The culprit, I learned in my early 30s, was Crohn's disease, a hereditary auto-immune disorder that made my body think last night's spaghetti was actually a deadly pathogen to be attacked and defeated. While I was relieved to finally discover the real reason for a childhood and adolescence spent largely in public restrooms, I was saddened to learn that my condition was incurable, at least at present, and that I'd likely need daily maintenance medication for the rest of my life.

I'd also wind up needing surgery to remove a diseased part of my digestive path--a common result of the disease. While I recovered in the hospital, the doctors told me that all that bike-riding had made me a much better candidate for surgery than most Crohn's patients, and had helped the surgery go much more smoothly. More important, they also urged me to keep riding my bike once I recovered. While no western doctor would come right out and say that daily exercise would directly ease the effects of Crohn's disease, they all told me that exercising was far better than living a sedentary life, if only to help move the overload of toxins through my body faster and more easily. 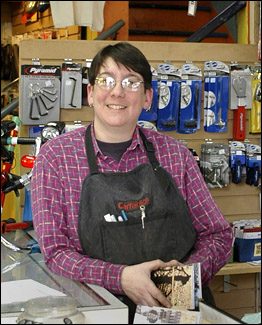 Bicycle-riding has helped me to stay physically healthier and much more mentally positive, about living with Crohns and living in general. I have no health insurance and can't get any on my own; with a chronic condition, bicycling is likely the best health plan I can have at this time. I made a conscious decision that if I couldn't afford health insurance or a retirement plan, I would live a life that let me be as physically active and as healthy as I could be for as long as possible. I am blessed with an employer that accepts the ups and downs of my condition, and cuts me slack on the days when I need it most.

There are, of course, days when I am too fatigued to ride very much. Thats a part of living with the disease, as I cannot fully extract all the nutrients from my food, and my body expends a lot of energy trying to fight my food. But with the combination of drugs, a decent diet (in my case, eating foods that don't irritate my system as much), vitamins, and all that bike-riding, I know I'm doing better than I would be if I'd resigned myself to a sedentary life and just given up. Plus, I look healthier than many Crohn's patients, because my daily bicycle-riding also gives me endurance, muscle tone, and the glow of health. People who meet me for the first time are surprised to learn that I live with a chronic illness, because I don't look like a sick person. I mostly chalk that up to all that bike riding.

My doctor suggested I begin tracking my mileage on the bike, both as a way to discipline myself and also to reward myself when I saw the results. In 2006, I set a goal of riding 2,000 miles--and accomplished that in the first week of December. I plan to try for 2,400 in 2007.

I can sit and moan about the dreadful state of health care in this country--and it is dreadful, make no mistake--or I can embrace the things I can do about my life and health, and keep on riding my bicycle.

For more information about Crohn's disease, check out the website of the Crohn's and Colitis Foundation of America.

Beth Hamon is a bicycle mechanic, musician, and teacher living in Portland, Oregon. She sold her car in 1990 and has relied on her bicycle and public transit for most of her transportation needs ever since (though she will drive her partner's hybrid car on long trips if absolutely necessary). She founded Slug Velo in 2003.
Photo by Jonathan Maus.