In Praise of Fixies
by Richard Risemberg (Los Angeles, December 2006)

I came late to the mystery, not encountering it till I was fifty-three years old. I had heard about it--hints and whispers here and there--and I had seen its initiates passing in the street, serene but a bit outlandish always in some way. I knew that the tradition was old--as old as the bicycle itself--but that the practice had been lost, hidden nearly, for over a century, surviving only in the velodromes and among bicycle couriers in the shadowy canyons of the world's downtowns, and a few eccentric tourists in England.

But in the last few years something moved and changed in the collective heart of the race, and more and more among us began to seek out the fixed-gear bicycle and become initiates. I began to see more of them on the streets, and hear more about the pleasures and wonders of the fixie not only from enthusiastic strangers but from friends as well.

The simplicity appealed to me, the directness, and the tranquillity it seemed to promise. But I was skeptical After all, I had spent many hours computing ratios for half-step gearing, carefully tuning my index shifting systems, placing my derailleurs just so for the perfect click...did I dare to give it up, even temporarily?

But I had to know. So, burdened with distrust though I then was, I gathered to myself the necessaries, cheaply, almost carelessly, and assembled the machine. Almost fearfully, I slipped into the pedals and rolled into the street.

It has been three months now, and the coasting bike with all its shiny gears gathers dust.

What can ya say? Those of you who ride them, know: the fixed-gear is addictive. 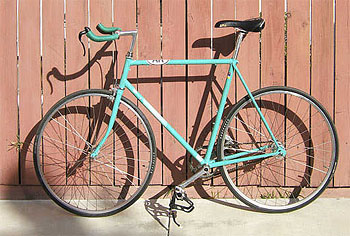 I spent very little putting Satchmo together, not knowing whether I'd like riding fixed, despite all the praises sung to fixies on Sheldon's site, on Dennis's, and by riders I met at coffeehouses or Critical Mass. The universal gesture seemed to be to stare with wide, bright eyes into the distant sky and effuse vague generalities about how "great" the experience was.

Then again, I'd heard that they were difficult to ride, easy to crash, hard on the knees.... It was with a certain trepidation that I Slipped my shoes into the toe clips and slowly, s-l-o-w-l-y inched down the driveway of our building, turned around, then inched back to the garage area where I work on the bikes. Back and forth, circle, circle, back and forth, while my wife Gina snickered at me. Finally she said we should ride the half-mile or so to a nearby fountain and take pictures of the bike. I got off to roll it down to the street, pointed it the direction in which we were going to start off, and went for it.

And lived to tell the tale.

The next day I had to ride to a bike shop to get cable housing for the front brake. Gina said, "You should ride the fixie." I said, "It has no brake yet." She said, "I'll ride behind and spot you."

Now, I know that didn't make any sense. But it was good enough. And it was uphill all the way to the bike shop anyway.

Of course, it was downhill all the way back. But I lived! True, it was one of the slowest rides I've done since I was eleven years old, as I was scared to build up any speed, but I lived...and I felt the magic.

Nowadays I use the front brake maybe two or three times a week, and some weeks never. I'll leave it on, because LA has extremely erratic drivers and plenty of hills, but most of the time I glide through traffic using only my legs. This is one part of the beauty of the fixed-gear: it feels so natural. You aren't switching modes between feet and hands, between brakes and pedals. It's simply augmented walking: you want to go faster, your legs move faster, your bike moves faster; you want to go slower, your legs move slower, the bikes moves slower. I don't skid, ever; but I do some heavy leg braking at times, and it's no more extravagant than slowing from a downhill run on a trail or a San Francisco sidewalk. The fixie simply extends me, expands me, integrates me with the glide of gravity and speed in a way that doesn't distract me from the world around.

It also makes moving through traffic much easier. I'd heard it was so, but wasn't sure...but it's so. Your hands can stay firmly on the bars, and your legs do everything. Suddenly slipping through traffic is as natural as walking through a crowd. And low-speed turns are easier when you don't have to brake with the front wheel. I am not a naturally graceful person, but the fixie makes me almost graceful on the road. 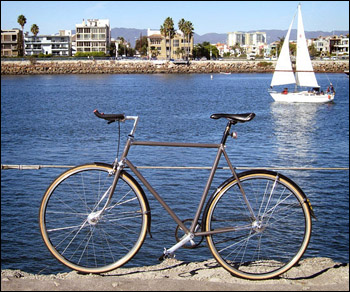 The vaunted "efficiency" of the fixed gear, which I'd heard much about, seems to be true, though I have not put the bike and me on a dynamometer, of course. But I seem to do the same rides I did on a coastie with less effort on the fixie. Of course, since I don't shift up, I go slightly slower, at least on flats and downhills. But I also notice much more of the world around me, and, since my cadence is more constant, I feel more relaxed. A ride down La Brea through some occasionally banal absorbed suburbs to PCH was more interesting on the fixie. When I had last tried it on the geared bike, I'd gotten bored and turned off towards the coast several miles earlier than I'd meant to. There is certainly less chain to move, and it takes fewer turns as it moves, having no derailleur pulleys to wind around; the wheel itself is lighter (and stronger: no dish required); and the entire bicycle is lighter by about five pounds than it was in geared trim.

And the flywheel effect means you are not always "catching up" to the pedals as the bike outruns you slightly with every turn of the crank. It also means you can climb hills in a far higher gear than you could with a coastie. I was amazed at the steepness of hills I could climb. I keep trying steeper ones. I've had to walk part of only one so far (with a 69" gear).

The "direct connection" of the fixed-gear gives you a better feel for riding in rain or other conditions when traction is not optimal. And brake fade in bad weather becomes a non-issue in normal riding.

I now have the Bambina, a second fixie; and a third frame, an actual vintage track frame, waits under the bed. My coastie? I sold it months ago. I might build another some day, for hammering on Sunday rides or for heavy load hauling or touring. But my main ride, and certainly my commute ride, will remain a fixed gear for as long as I can imagine. It works too well in city traffic, and it makes me too happy with life, to give it up.

Some advice for those wanting to try riding fixed: