If a web page fails to load within a few seconds, Internet users click and go away to another site. If television viewers aren't captured quickly by a message conveyed in a commercial, or hooked on what's happening in a sitcom, they'll change the channel. In a retail store, if an end-of-the-isle display doesn't catch a shopper's eye and draw them further into the store, revenue will be lost from would-be impulse purchases. So goes the story of our age: our attention spans are limited. We can think faster than we can write, speak or read. It takes an ever increasing frequency and quality of images, ideas and information entering our mind through our eyes, ears and nose, to keep our attention. 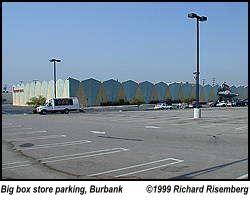 Take a casual walk through an extended-term parking lot at the airport. There is barely enough to keep your interest in the short time it takes to reach the car next to yours--let alone in the time it takes to get to gate 27A. Parking at the outer edge of a mall lot is no different. There's little to keep your interest. As in a jaunt on a tread mill, there's little to capture the imagination. Enduring the view of endless asphalt, yellow parking lines, litter and metal lamps is comparable to watching a test-pattern on television or waiting for a modem to dial a server.

But once once you're in the mall, images come at you from every direction imaginable. There are fountains, signs, music, food samples and salespeople. The colors, textures and even sounds of the merchandise and displays occupy the mind. While moments ago the walk over the asphalt outside seemed torturous and eternal, inside unlimited footsteps go by without you thinking about the walk. Your mind is busy with other things. 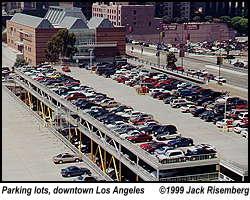 In mid-America's struggling downtowns, the frequent and stimulating images left with the street cars. The once activity-filled sidewalks have been interrupted by parking lots between buildings, blank walls and grassy setbacks designed to simulate suburban office parks. When the streets of city centers were filled with the small store fronts of long and narrow buildings, pedestrians could walk for hours and be occupied by a limitless band of stimulation from the smell of hot dogs and peanuts to the creative displays in the store fronts. Today, the large-scale office buildings have smooth granite walls that extend for blocks--making a walk seem more like the struggle at the airport, or the time spent logging on to a computer, than the time spent wandering through a shopping mall.

In some places, new downtown malls have replaced smaller stores in an attempt to replicate the suburban success and draw pedestrians inside. Yet without varied, frequent stimulation in the public world outside, there are unlikely to be pedestrians to bring in. So, the downtown mall managers and merchant groups turn to television, radio and the Internet--the experts who know about capturing the consumer's attention and providing enough stimulation to capture attention. The marketers are able to entice people to drive downtown--where the commercials say all the excitement is.

But the fastest way to kill a bad product is a good promotion, and the sterile imitation downtown created in one single swooping development is a bad product. When the shoppers come, the absence of stimulation on the outside, a situation created in part by all the parking garages, keeps those who make the drive off the streets. They park in those garages and go in and out of specific retail stores, a movie, or a baseball game. The individual destinations may momentarily occupy the mind--but there's still no attention grabbers on the street to draw you into the community itself. The consumer is enticed to behave as a raider, not a colonist.

The highways, built initially to increase access to downtowns, have the same effect. Today, dark, over-shadowing concrete slabs are psychological barriers to pedestrians. Like parking lots and dark underground garages, they're not only uninteresting--they're threatening. Spaces in between buildings where others have been demolished are also "disconnects." Like TV veiwers who reach for the remote when the show becomes the slightest bit tedious, when pedestrians reach a break in the buildings they are faced with a lull in images and messages--then turn around and walk the other way.

Look outside any large office building. Blank walls and tinted windows stretching for more than a few feet will mean the sidewalks are usually void of people. Then, take a gander at a neighborhood with small buildings, street trees, signs and street furniture. You'll see people walking. The small storefronts, ground-floor retail and lack of parking spaces provide the stimulation necessary to keep the pedestrian's interest. 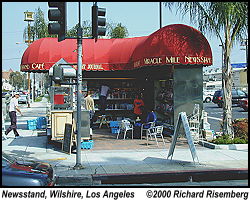 This isn't the creation of a massive development. It's an organic environment created over time by small business people, individual investors and generations of customers and residents. Too often today, when developers and city planners look to redevelop an urban area, they clear away small buildings, chase out small retailers, create parking and take people off the streets through construction of underground parking, interior malls and skyways that connect buildings. Instead of rebuilding one business at a time, they remove everything that could catch the attention of the pedestrian in one grand swoop. The hot dog cart on the corner, the vegetables lined outside the grocer, the newspaper stand, the colorful displays in the shop windows, the park benches, historic architecture with varying textures and patterns and most importantly, the people on the sidewalk.

These are things that allowed downtown and the city to keep the attention of Americans throughout the first half of the 20th Century. Until they return, the mental channel attracting people downtown will quickly be changed.