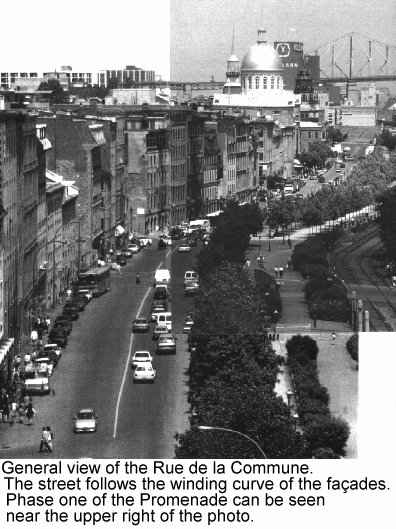 Montréal's Promenade de la Commune is a bicycle-friendly street. But don't expect to be able to ride along at high speeds, as you can usually do on other major streets in the city. At least not on a weekend afternoon in the summer. What was once a mono-functional arterial street has now become a very pleasant tree-lined river-front promenade, where the movement of vehicles is not its only raison-d'être. In fact, on a sunny Sunday in mid-summer, vehicular traffic definitely takes second place to strollers, families, in-line skaters, horse-drawn "caleches" and eventually even to waiters crossing the street to serve patrons at tables under the trees of the promenade. Definitely not a street for would-be road racers.

The promenade is a ribbon of granite that follows the winding curve of the 19th century grey stone façades of Old Montréal, marking the limit between the once-fortified city and the St. Lawrence River. The simple parallel curves of its geometry reflect the alignment of the façades and heightens our awareness of the character of the place. Restaurants take advantage of the wide sidewalk in front of their establishments to set up tables. Across the narrow carriageway are three stepped sidewalks leading up to the wide pedestrian promenade in the centre of which are shade trees planted in two parallel rows. The raised promenade allows people strolling beside the low wall and steel tube handrail at its southern edge to enjoy the view over the Old Port and the river.

Phase one of the Promenade de la Commune was completed in 1992, just in time for the celebrations of the 350th anniversary of the founding of Montréal. The concept for the project was the result of a "charrette" (an intensive workshop session) led by architects Melvin Charney, Peter Rose and Aurèle Cardinal. The conceptual plan was adopted by the City in 1991. The objectives were quite simple:

These goals were eventually materialised in the definitive project in the following way: 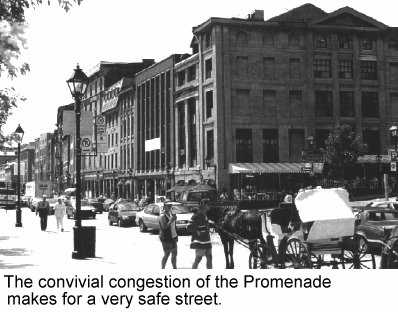 A Clash of Cultures
The project was realised beginning in the summer of 1991 by the Public Works Department of the City according to the working drawings produced by the newly-formed Urban Projects Bureau, under the direction of architect Alan Knight. The project did not proceed without numerous controversies and internal battles that persisted even after completion of the work. A clash of cultures, the culture of urban architectural know-how on the one hand, the culture of the traffic engineers on the other. The idea of a project that would narrow the roadway in order to force vehicles to move more slowly, a project that would even deliberately produce a situation of congestion with a chaotic but convivial mix of pedestrians, cyclists, caleches, buses and cars is completely anathema to the modern culture of traffic engineering -- even in the case of the promenade project where a co-ordinated effort was to be made to divert the fast through traffic from the Rue de la Commune to other parallel streets. Happily however, through sheer persistence (and some political arm wrestling) the project was built pretty much in conformity with its conceptual principles. 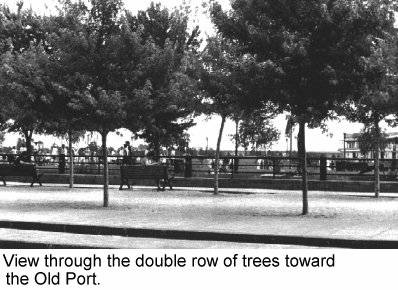 Perhaps not unexpectedly, the traffic engineers found an ally in the local bike lane advocates. Until the construction of the promenade, there had been a segregated bicycle lane along the street, confined to an alley visually cut off from the street by hedges on one side and from the Old Port by a tall fence on the other. The guiding urban principle of the promenade project was (and is) the mix of people, the multiplicity of functions and the hierarchical mix of different types of circulation: pedestrians / cyclists / caleches / buses / cars. The pedestrian is king in this hierarchy, and can enjoy the comfort and safety of the granite-paved sidewalks, while not putting his life in peril when he crosses the carriageway. Cyclists and motorists take second place. The designers in the Urban Projects Bureau recognised that the bicycle is a vehicle and that the safety of cyclists is best served by allowing them to circulate freely in normal vehicular traffic, following the same rules of conduct as other drivers of vehicles. The safety of cyclists, of even the inexperienced and less competent ones, would certainly not be jeopardised in the promenade, where traffic is forced to move very slowly during times of high congestion. At other times, width of the traffic lanes leaves ample room for bike-car lane sharing. The bike lane advocates and their supporters at the City wanted some sort of a return to the status quo, arguing that the link between the existing segregated bi-directional bike lane that joins the Rue de la Commune at its eastern end, and the multi-functional recreational Canal de Lachine path at its western extremity must not be broken. Eventually, a sort of compromise was reached, and it was decided that a clear system of signs would be installed, informing cyclists on the bike paths that they must stay on the carriageway of the Promenade de la Commune, using it as a shared roadway, or directing them to an alternative route through the grounds of the Old Port. None of those signs were put in place and a certain ambiguity persists, at least for less experienced cyclists. 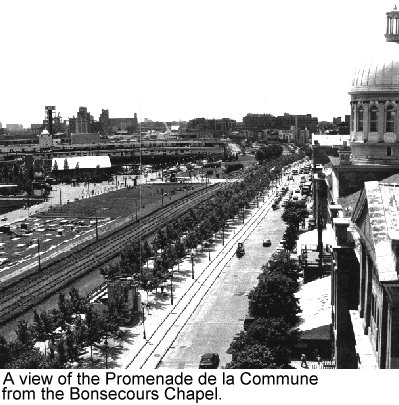 Success
The principles embodied in the project -- the mix of functions and people, the culture of congestion, the pleasure of seeing, the pleasure of movement, the pleasure of variety, the comfort and simplicity of the design -- have made the Promenade de la Commune a cultural and a commercial success. The many hundreds of thousands of people that visit Old Montréal and the Old Port every year now include the the Rue de la Commune in their experience. Businesses and cafés along the promenade are thriving. Many new boutiques and restaurants have opened since the summer of 1992.

The Promenade the la Commune is a quintessential urban project, embracing urban values, realised with urban know-how. But the funny thing is, the majority of the "tourists" that frequent it and enjoy it, as well as the old city and the Old Port, are in fact people from the automobile suburbs around Montréal.

Wade Eide is an architect with the Montréal architectural firm, Atelier BRAQ. From 1991 to 1993, Mr. Eide worked in the Urban Projects Bureau at the City of Montréal, where he was a member of the Promenade de la Commune project team.
Illustrations for this article are from a study prepared by Atelier BRAQ and Saint-Denis, architectes paysagistes for -- and with the collaboration of -- the Urbanism Service of the City of Montréal.