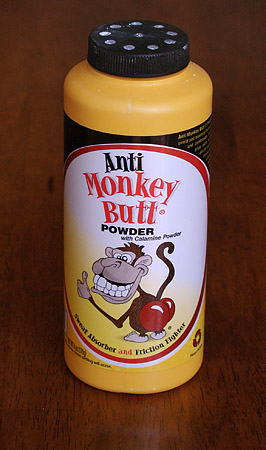 This will be (if you will forgive me) a "brief" review, for what we have been road-testing for the last few weeks has been a medicated talc you put in your briefs to prevent chafing on long hot bike rides.

There. We said it right out front. Once you all finish giggling, read on. Because the stuff really works!

This despite the gross misrepresentation embodied in its name: it should be called, of course, "Anti Baboon Butt Powder"!

But I'll forgive them. I was an English major after all, and the prosodic qualities of "Anti Monkey Butt Powder" are, to my mind, superior to the rather flatter poetry of the more-correct version.

It's talc, a bit of fragrance, and calamine, the latter being the magic ingredient, a compound of zinc that has been used to treat skin conditions for decades, perhaps longer.

And it works: I've it now on several very hot-weather rides, with temperatures over 90°F--often well-over. Sometimes I wore padded tights under my knickers, more often just boxers. A number of forty-mile round trips to South Pasadena (a weekly run for me), a seventy-miler down to Long Beach and back with a group ride in the middle, and a crazy forty-five-miler that involved 3900 feet of climbing, 2200 of it on a dirt fire trail on a treeless ridge, which I rode fixed on street tires.

The stuff kept me cheeks quite comfy throughout the duration of every ride.

Not only that, but an incipient saddle sore that was not responding to my usual regimen of benzoyl peroxide and antibiotic ointment disappeared a week after I began testing the AMBP. Could have been a coincidence--but my tail is happy, and as I'm a daily cyclist, that makes me happy!

The downside is applying it. Talc is very white and flies all over the place at the least provocation, and the majority of cycling shorts, tights, and pants, including those we manufacture, are, if not black, generally quite dark. Till I got the hang of it, the applications were pretty messy. I now usually apply it to hands first, then transfer to the booty. Carefully.

I thought, because of the silly name, that the product might turn out to be frivolous and ineffective, but it seems to work as advertised, and I plan to keep using it.