In common with many of my velo-fellows, I occasionally amuse myself by cruising eBay in search of bicycles, or bicycle bits, that I actually have no present intention of buying (or, often, the liquidity to do so regardless). One of the things I often search for are path racers, or track frames generally, hoping I will find a vintage British path racer in my size. 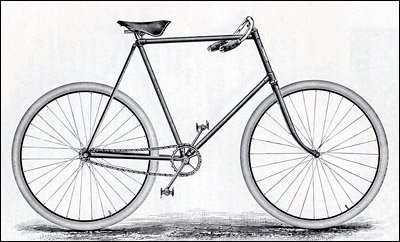 A path racer is a bit of an odd bird in cycling, being essentially a track bike with road geometry and clearance for biggish tires, to let you use it on unpaved roads. They generally come with track ends and a high bottom bracket, but include fender mounts and sometimes other braze-ons. For someone like me, who loves to ride fixed out in the real world, in good weather and bad, up hill and down, and who enjoys exploring the odd back alley or dirt road, it's the perfect design. Naturally, they're hard to find, especially in the 59 to 62 centimeter size range I require.

Ironically, it's nowadays very easy to find a true track frame in dozens of styles, from classic lugged to LSD-influenced carbon designs, and often at spectacularly good prices; used track frames are also plentiful. Those bikes, however fun and stylish they may be, are not, however, all that great on, say, wet, broken asphalt, especially when carrying a heavy messenger bag for long distances.

So I cruise the 'Bay, finding the sort of bike I seek maybe three or four times a year, invariably in the wrong size, or at too high a price, or half the world away with shipping equal to the purchase price.

So I was astounded one day to find a listing for a brand-new "track" bike with clearance for 40mm tires and, furthermore, with both rack and fender braze-ons--and for around $225.00, shipping and a headset included.

Of course, it was a Taiwanese welded frame with a slightly-sloping head tube and threadless steerer, all features I dislike. But I thought: it will be at least five years before I can afford to commission my friend Greg Townsend to build me a custom path racer. This thing--a "Motobecane" Jury from Bike Island--might do in the meantime, let me test and refine the concept, and serve as a suitable back-up bike to my marvelous 42-year-old Bottecchia Professional fixed-gear conversion.

As always when something interesting or amusing shows up in the bicycle world, I presented the link to my friends and colleagues on the iBOB forum. 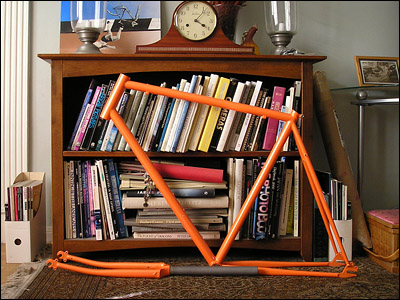 Of course, a group dedicated to traditional and vintage bicycles wasn't the best audience for a cheap Asian ripoff of a defunct French brand, especially one that makes not the slightest effort to echo the traditions of its eponymous predecessor, and the reaction was amusing, as I had anticipated. Some were supportive, indeed; but many more were appalled; and one went so far as to call it "garbage"--and he had bought one! (What he had expected from a two-hundred-dollar frame, I am not sure.)

I took it as a challenge, and decided to "make a silk purse out of a sow's ear"--and a good bike out of an odd cheap frame.

So I put my classic Trek 531 frame for sale, and ordered up my PseudoBecane not-quite-a-track bike.

I'd never really enjoyed riding the Trek, and he found a good home with a collector. Even if the PseudoBecane didn't please me much, I'd not be worse off. And if it worked well enough--it would not have to match the Bottecchia, a genuine mid-Sixties stage racer--I'd use it for shopping runs, visits, downtown, maybe someday pulling a trailer. That would be enough.

So I paid my money, and I took my choice--or rather my wife's choice, which resulted in a bright orange bike. ("All your clothes are black, at least your bike should have some color.") 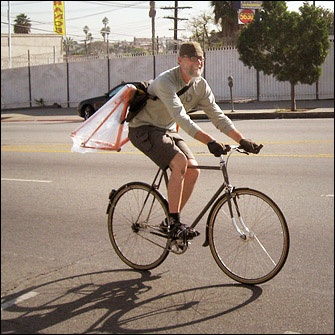 The frame arrived quickly, nicely packed, with cardboard round the frame tubes, dropout protectors, and a heavy plastic bag over all. It looked clean and well-made if aesthetically unexciting (which is good for a lock-and-leave anyway). In the spirit of cheapness, I put the headset in using a length of all-thread fitted with nuts and washers, thereby turning a three-minute job into a half-hour ordeal. But in the end the cups went in straight and true--and part of what I want to do with this project is see how good a bike one can make out of very inexpensive products and procedures. If bicycling is to grow, it can't depend on customs and vintage bikes; there has to be something that folks without large disposable incomes can obtain that is better than department-store crap. So no fancy tools (for the most part), no shop visits, no high-end componentry.

Except that my friend Wes offered to face the bottom bracket with his Campy facing tool, and since he's a good fellow whom I enjoy visiting, I decided to take him up on the offer and pretend we hadn't done it.

By this time, I'd decided to name the bike "Trevor Wong," to celebrate his mixed heritage: a traditional British design, realized in its own way by Taiwan. I put Trevor back into his plastic bag--and strapped him onto my biggest messenger bag! Off we went on the Bottecchia. Trevor seemed to enjoy the trip, as he whistled through his steerer tube the whole way over. (Wes took the picture of me giving my new bicycle a bicycle ride.) 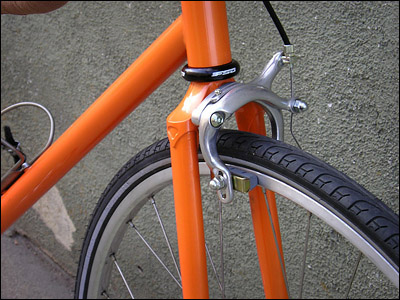 Wes's little workshop lurks behind a plain white door in the most nondescript storefront in Los Angeles, but the man knows his stuff, and the bottom bracket was faced in short order. Next we took out the stub of an M5 screw that I had broken off in one of the fender braze-ons (because, damn it, I'd been too lazy to reach across the garage to my set of taps and dies!), after which we ran taps through the braze-ons, which had a bit too much paint in them. Still in budget: I could have (should have) done that at home, and the tap and die kit had cost me 1¢ plus shipping on eBay.

Back home, and on went the wheels: not to put too fine a point upon it, a cheap set of Formula/Sun track wheels from BicycleWheels.com shod with Vittoria Randonneur Pros bought from iBOB John Wood. (They've proven to be good wheels, by the way; I used them on the Trek for several months.) An old welded stem from Wes's parts bin (soon to be replaced by a slightly-longer forged one from iBOB Carla), the Nitto 115 handlebars I'd scrounged up somewhere a couple of years ago, and the Alien crankset, finished off with MKS GR-9 pedals, my current favorites even though the flip tabs keep breaking off. The wheels had a Phil Wood cog that's now on its third bike. Add some headset spacers from Wes, plus a couple I'd actually bought, and Trevor was ready to ride, though sans brake.

First test ride: and well, he's a damned fine bike, a bit on the stately side compared to the Bottecchia, but truly a good ride. 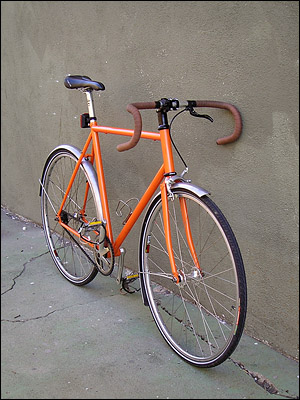 Deep in my parts bin was an unlabeled Tektro brake I'd bought--for ten dollars!--for another project and never used, and that found its way onto the fork, with a corresponding interruptor lever on the left side of the bars. (The frame, by the way, requires extra-long reach brakes, as in 75 to 90mm, limiting you to centerpulls or BMX sidepulls. Or, of course, no brakes at all. Or maybe coaster brakes!)

The next Tuesday, I took him on the 38-mile round trip to South Pasadena for coffee with Chuck Schmidt of Velo-Retro. Chuck wasn't impressed (he owns fifty or so beautiful vintage or custom bikes)--but I was. Not every bike need be sublime. Trevor's a solid chap, not as exciting as the grimy goddess whose soul inhabits the Bottecchia, but a good fellow, the sort you want to hang with at the corner bar.

A few days later he received the Velo-Orange discount aluminum fenders that used to clothe the Trek (aka the Green Gopher), making him a bit more of a polyglot, with Asian copies of French fenders covering Italian tires made in Asia.

And so there you have it: a silk purse from this Silk Road refugee, and a solid, capable, and comfortable bike for almost no money, ready to take on damn near anything--even snow, if he has to.

How's he ride? Solid, predictable, stable over bumps, cracks, potholes, and asphalt heaves, but quick enough to maneuver in traffic. Not as graceful as the Bottecchia, but a pleasurable ride nonetheless. Even burdened, as yesterday when I rode several miles with a microwave oven in my messenger bag to deliver it to my mother's house.

Might even get a trailer for him one of these days.

Text and photos (except as noted) by Richard Risemberg
Drawing is of a Kenwood Path Racer, from their 1895 catalog