There's not much in San Francisco that hasn't changed in 40 or so years. The city Tony Bennett sang about was one without a financial district, a multi-media gulch, tech enterprises, or half-million dollar one-room condos. The pace of change is accelerating. A visit to the city gives one a glimpse into neighborhoods whose character is unique not only to their territory but to their time.

Some see present day San Francisco as haunted by gentrification. It typically begins in an old, deteriorating neighborhood with only a few scattered businesses which begins to come alive when new immigrants move in. Artist's studios follow and soon so do restaurants and wealthier residents. The streets fill with people enjoying unique book stores, clubs, antique shops and revived theaters showing independent films.

But the change doesn't stop there. Soon new condominiums are being built, chain stores are moving in and what had been unique becomes more like anywhere else. But just as one neighborhood gentrifies, the process begins again somewhere else.

At any given time, somewhere in San Francisco, there is a neighborhood right at its peak of creativity and individuality. In 1999 it's an area centered around 16th and Mission Streets, which is being called the New Bohemia. Walking south on 16th from Market Street, one sees freshly painted Edwardian homes and apartments slowly giving way to small and scattered storefronts. The first sign of what's ahead is a sidewalk stencil declaring that Maggie the Cat is alive. It isn't clear who or what Maggie the Cat is. It's only important to know that what we didn't know existed a few steps back is significant to somebody.

After a few more blocks, past Mission Dolores where the city began, the sidewalks begin to fill with a diverse mix of people. Soon a large bagel hovers over a sidewalk cafe and another coffee shop decorated in red and green welcomes you for food that's good for your pocket, your soul and your politics. 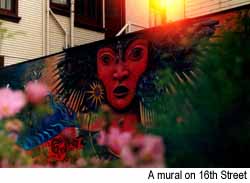 At the corner of 16th and Valencia what seems to be the permanent uniqueness associated with San Francisco can to be seen as a place in time along a line of change. Corner grocers run by Mexican and Southeast Asian families line the streets. Burrito shops, taquerias, Vietnamese and Indian restaurants offer some of the best food in the city at unbeatable prices. Then there are more recent establishments offering Spanish food, American "comfort" food and French crepes.

Long-established businesses selling books, used furniture and appliances are mixed with newer ones selling glassware, reproductions of 1950s furniture and vintage clothing. Only a few storefronts have been here more than twenty years; a cobbler, a laundry, a key cutter, a printer. Carefully painted murals of desert scenes and waterfalls brighten the outside of an auto body shop, while peeling paint and cracked windows provide a different ambiance for other businesses, and still others reassure you that you are in the good hands of a company with a real marketing plan.

The mix of people spans the racial, cultural, economic and psychological spectrum. Some are moving about their work, while others are walking to the subway, contemplating the day over a cup of coffee and a newspaper, or just sitting on the sidewalk unconcerned about the how and why of it all. Musicians entertain with signs lamenting stolen instruments or the need to travel to Chicago. A man speaking broken English sells flowers with his daughter by his side. One elderly gent whose long beard conceals his face walks the streets with a pigeon perched on his head. Those who have tried to talk to him come away disappointed. They find that a man who can be understood by birds speaks words which make little sense to us.

New Bohemia is not a permanent part of San Francisco. It is a place in time as much as a place on the map.

And while some may try to preserve it, they will have to learn that for New Bohemia, as for all things organic, there are only two states of existence: growth and decay. Breathe in the air, drink the coffee and enjoy the food now because change is the only constant.