Return of the Prodigalized Bicycle 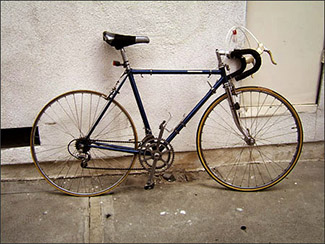 In 1977, I had my 1962 Falcon San Remo 10-speed racing bicycle stolen out of my Chevy Van parked overnight on the street in Marina Rey, California. Yes, I had it secured with a cable and locked to the spare tire assembly inside; but…a smashed window, some cutting tools, and, the next morning my bicycle was long gone.

There are streets and bicycle paths all over Marina del Rey, Venice Beach, and Santa Monica. However, at some time nearly everyone rides to a point at the Venice Beach Pier then heads east, north or south (you get real wet if you head west). So, for three straight week-ends, I positioned myself where I could see all bicycle traffic converging on this point at the pier.

"Zowie!" On the third Saturday, here came a teenager (maybe 14?) on my Falcon bicycle—even with the handlebars inverted, I recognized my bicycle. I ran the teenager down by taking a straight line to where the bicycle path veered and waiting for him.

A few minutes later, here he comes! I grab him and show him that a key I have in my pocket unlocks the chain which is wrapped around the seat post. He was more than a little surprised. Then, I walked him and the bicycle down the boardwalk (actually asphalt in Venice) to where one of LA's finest was in a patrol car.

Kid said that the bicycle was his uncle's. I asked him, Could he explain to the policeman how I had a key that opened the lock on the bicycle? Plus, I had registered the bicycle with the LAPD. It was in their database.

Fast forward: the kid went off with the policeman in the back seat of the patrol car; I went off on the Falcon bicycle riding first to the Venice Pier, then home. I turned the handlebars to their original position, and life was good again. I was out of pocket the expense of getting the Chevy Van window replaced, but otherwise….

In the summer of 2013, I am still putting miles on my now-vintage 1962 Falcon San Remo 10-speed racing bicycle. The kid, if he's still alive and not in prison, must have headaches from his kids or his girlfriends (or boyfriends—it is LA, you know), and/or ex-wives.

That would be nice; he has earned any headaches he may have.