Park It for Them, and They'll Come: a Bike Valet Primer
Robert Leone
2010

My local advocacy group, the San Diego County Bicycle Coalition (SDCBC), occasionally operates free bike valets at popular events. It's a lot of fun, and a great opportunity for advocacy and information sharing. It is also a lot of work.

I'm going to lead off with the work. Much of it is on the "back end," far from the street fairs, ball games, and air shows where we deliver service. The big ticket capital investment is in the racks. Or not in the racks--the SDCBC's longest running bike parking gig, EarthFair in Balboa Park, has operated for most of its four decades using the simple expedient of 2"x4" beams laid across traffic barricades. It's cheap, and easy to set up, but finding the lumber and barricades for every event is a pain. And watch out for splinters!

There are purchasable racks suitable for large events from the likes of Minoura, but the SDCBC is fortunate in having a very inventive board member who's comfortable with tools, and just happens to have an arbor press in his garage. A carefully specified mix of electrical conduit and fence posts features in his designs. They typically have two skinny, crimped electrical conduit posts at either end of a long (eight feet to ten feet) pole, held horizontally about three feet above the ground. Some of the long poles are telescoping models that shrink down to about six feet long, but extend to about ten feet. Our storage solution for these racks is a locker at a local commercial self-storage facility--it beats using someone's already-overused backyard! 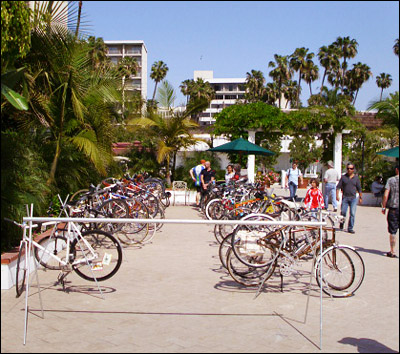 Bikes parked on racks at the 2010 San Diego Custom Bicycle Show
The racks aren't the only investment. Running daytime bicycle parking would be even hotter, sweatier work without pop-up or other sunshades, a table (for administrative paperwork, handouts, and the occasional pizza), and chairs. Folding plastic, metal, or fabric chairs work well. Sometimes chairs and table are part of the street fair's own owned or rented equipment, sometimes camping and roll up tables and chairs are provided by the bike parkers themselves. A gratuity jar helps defray the expenses of the racks, claim checks, and other capital and consumables.

You'll need staff, volunteer and otherwise, for set up, tear down, and the actual parking operation itself. As a bike parking worker, I use a simple script: "Hello and welcome to bike parking at [event]. Our system is simple: One number on two separate bands. [It's great to separate the bands at this point, in front of their eyes, right after they see the number on the bands is the same]. One band is for the bike. [Secure band around stem or handlebar]. The other band is for you. Pick a wrist. [Secure band on wrist]. I'm putting this on loosely, because it could be warm today, and because we'll be cutting these off with scissors when you return. We close at [time]. We're on eBay at [time plus fifteen minutes]. Please pick up your bike before then. Thank you and enjoy [event]."

If we're in a position where people are parking their own bikes, I show them how the nose of the saddle goes over the top of the post "just like at the triathlons," and remind them most saddle rails are steel, and wouldn't be hurt by this sort of treatment. It's very rare to see carbon fiber railed saddles ridden as transportation to a street fair or other event. It's also nice to remind people they can leave their helmets if they've worn one (hooked to the handlebars works best, I feel). Further, if their bike has a water bottle, it might be good for the riders to take that with them.

As for locking the bikes, I let them know it's not needed, but we'd understand if they did. I should note here the dismountable racks we use can, with difficulty and manpower, be disassembled and separated from a bike that's locked to them. If people know in advance they'll be at the event longer than we're to be at the event, we'll help them spot something secure to which they can lock their bicycles. By the way, most space used for bike parking is open along at least two to all sides. You'll want someone sitting down in back as both a security monitor and an aide for those claiming bikes from the back of the lot.

When people arrive to recover their bicycles, you'll help them find their bike, cut off the wristband, compare it to the band on the bike and remove that as well. You'll want to take all claim checks--to prevent false bike loss claims. This might be a bit of a rush--often people arrive at staggered times during the course of a day for a street fair, but when it's ending or just ended, they'll want to leave in a mass. Actually, most of them will leave in a mass--so parking family and other groups together is a good idea.

One thing I like to do, but often forget, is reminding people to check their tire inflation before they ride off. Sometimes folks ride in on tires that are atrociously low, or even flat-out flat. Probably the worst I've seen recently was someone who tried to inflate a tire with our floor pump, but stopped when I pointed out the puffs of talcum emerging with each downstroke. We sometimes remember to bring a floor pump and a very modest selection of tools to the event. Seatpost and saddle tightening are next after tires in the easy repair department

Unfortunately, not all people will leave in a timely manner. We were fortunate at the Adams Avenue Roots Festival. The nearby Blind Lady Alehouse is owned, operated and staffed by cycling supporters. They were able to use extra storage space to hold three or four bikes that were still in the bike parking lot an hour after we were supposed to close. Ironically, right after we'd transferred those bicycles, one of the riders came up. He'd been drinking at the Blind Lady.

It's not all about the rack. You'll also need bare space for bikes with kickstands, long recumbents, tandems, and trailer-towers. I do have some practical notes--the difference between the bikes at cycling-centric events and mass popular events can influence the way you'll set up your bike parking area. For example, most of the bikes ridden to the San Diego Custom Bicycle Show 2010 were aluminum, titanium, carbon fiber, or relatively lightweight steel road machines. However, at the Adams Avenue Roots Festival or EarthFair this year (or for that matter any year) a large fraction of the bikes ridden are kickstand-equipped beach cruisers of substantial mass, hefty Huffys, and old electro-forged Schwinn "middleweights." Thus, the bare space "kickstand alley" you'd have for an event for cycling enthusiasts would be dwarfed by the bare parking space needed at a street fair. Be sure to have a "tandem country" to accommodate tandems, the more lengthy of the cargo bikes, and the folks hauling trailers. Keep in mind heavy bikes can stress a rack more than the same number of lightweight bikes.

There are two elements of bicycle parking that make it valuable to the SDCBC. First, it is a service to cyclists that falls in with the organization's goal of making cycling better in San Diego. It encourages people to ride to an event--which may empower them to ride for local errands and fun.

Second, it's an opportunity for outreach to individual riders who may not identify themselves as cyclists or potential cyclists. Historically, the SDCBC is a coalition of cycling clubs and group riding groups. "Unattached" cyclists can feel out of place. More likely, riders who aren't in clubs, or don't even consider themselves "cyclists," may not know the SDCBC exists. These public venues allow the SDCBC to promote itself and other events we're involved with (such as "Bike to Work Day," "Bike the Bay," and our "Traffic Skills" classes). It also allows SDCBC to inform riders of such things as the status of certain street repairs and give them information about the latest upcoming bike route, lane, and path map. We even get a few new paid memberships from these bike parking events. 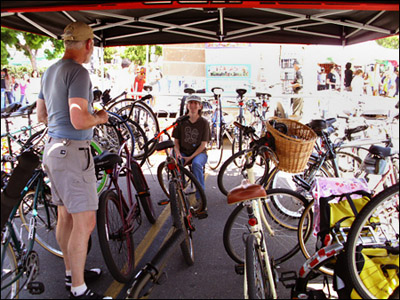 Bike Parking Volunteers Demonstrate Volunteer Fatigue in the Midst of "Kickstand Alley" at the Adams Avenue Roots Festival
This is primarily a volunteer effort for the SDCBC. We try to partner for staffing purposes with local bike shops and the event's own volunteer corps--if it has one. For example, at one Air Show, we'd been fortunate to have volunteer staff from a local high school's Naval Junior ROTC. They very nearly manage themselves, right down to regular shift changes that allowed them all to enjoy the event. At EarthFair we'd also gotten several shifts of volunteer helpers from the event. We're currently evolving a policy to rent racks and provide services for a fee at public events, but I doubt we'll make it a major profit center for our non-profit organization.

Volunteer fatigue is an issue for bike parking, both during an event and over the course of a number of events. Try to switch out the casual volunteers every four hours or less, and give the hard-core bike parking skilled labor cadre long breaks if possible. If not possible, rotate people through the security posting in the back of the bike parking lot. Even our most avid cycling parking people were tired of the whole thing by the end of April, where we'd parked bicycles at the San Diego Custom Bicycle Show, EarthFair, and the Adams Avenue Roots Festival: Six days of bike parking over three weekends. If you're operating with volunteers, you may have to say "no" to some otherwise worthy events and festivals that want bicycle parking services.

So why do it if it's so much work? Because bike parking is fun! Event-goers appreciate having someplace to wheel their steeds, where they'll be watched. It relieves the burden on already-crowded sidewalks from riders locking to street furniture. They know riding their bikes helps that day and every day to make the world a better place. They appreciate knowing an organization is ready to help them do that. "What a great idea!" and "Next year I'll ride my bike" are common comments. If you'd like to meet new people, share your love of cycling, and be of service to your local advocacy groups, go park some bikes. You'll probably not regret it.

Text and photos by Robert Leone