Bicycling and Transit in Albuquerque

New Mexicans are painfully aware that our state ranks last or next to last (Mississippi is always sure to be at the bottom) in many conventional quality of life statistics: high school dropouts, children without insurance, drunk driving deaths, local pols entertainingly arrested for various felonies. But the state and its principal city, Albuquerque, have been blessed in the last few years with exceptionally good leaders: Governor Bill "his eye on bigger and better things" Richardson and mayor "for life except for term limits" Martin Chavez. This is Marty's ("Marteen" with the accent on the second syllable, if you are Hispanic) second term, won like the first with little chance for the opposition.

All new surface streets in the city have bike lanes, and our paved bike path system has been well maintained We even saw a "share the road with bicycles" TV ad campaign a few years ago, but the most important innovations under the Chavez regime have been express buses with bike racks.

The first cross town express bus, an articulated double length model running on a diesel-electric hybrid power system, skips frequent stops for speed. The are equipped with electronic devices that control traffic lights in their paths: to speed up reds and extend greens and, even, at a couple of particularly busy intersections, to switch reds to green almost immediately. These express buses also have bike racks that can carry three bikes, instead of the two bike racks on regular buses. 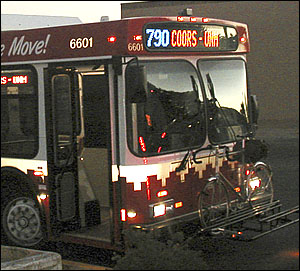 There are now three express routes: one east-west along Central Avenue, part of the old Route 66; one along Coors Boulevard, the newer and very busy north-south artery west of the river (where most of the city's recent growth has been); and, starting last August, an express that runs from a popular shopping center just west of the river to the very popular University of New Mexico stop (its western terminus is just 300 yards from my front door).

So popular have these express buses become that the city recently authorized drivers to allow bicycles inside as long as they do not interfere with other passengers. The westside-UNM bus in particular is full every morning with students, many of whom have bicycles with them. I have been busy driving my daughter to school in my old van (which I park at school so that I can ride the remaining 10 miles into work), so I haven't tested this new ruling, but I will probably have the opportunity to do so soon.

And most recently, the City has offered free bus passes to all University of New Mexico and College of New Mexico students. The success of this initiative is found in the packed buses: this morning (October 26) the bus was so full that the driver would not allow bicycles into the passenger compartment.

On the broader front, Governor-of-All-He-Surveys Bill has installed a light commuter train running north-south from Las Lunas or Belen (two communities south of Albuquerque) to Bernalillo, a similar community just north of it. The train has been very popular, and work will shortly begin on extending tracks to Santa Fe. (The present route makes use of existing tracks.) Even better, the train will take bicycles: there is dedicated space for two on each car, and the additional wheelchair space, if not used for wheelchairs, can hold up to 10 more.

Also, he has made loud noises about extending the city's paved north-south bike and recreation trail through the bosque--the mile wide line of trees and green in the otherwise high desert terrain that follows the Rio Grande--from its present 15 mile length, to Belen, some 30 miles south of Albuquerque, and to Bernalillo, some 20 miles north. He has made fewer noises about this project since the 2008 elections became news, but at least ours is a state where this sort of thing is popular and considered newsworthy.

When you consider these more recent innovations together with the city's good weather (it is possible to ride year round if you can take a few cold mornings and hot afternoons, since our average precipitation is only 8 or 9 inches a year), wide, straight, and relatively good roads, and modest traffic (compared to, say, Washington, DC, or Los Angeles), you have to conclude that life is not bad for the Albuquerque cyclist. Add to this a culturally accomodating population and enough variety in terrain (from the flat valley at 5,000 feet, to the rolling hills north of the city, to the high mesa on the west and the Sandia mountains on the east), and you'll suspect that Albuquerque is probably one of the country's better cities for cycling. And since Marty has his eye on the governorship once Bill makes it to the White House, who knows what the future may bring?