Cycling in Hanoi: Can the Past Become the Future?
Debra Efroymson
2008

Whenever I get back to Hanoi, where I lived for four years in the mid-90s, I go to visit a friend with Parkinsons. I used to cycle there--heck, I used to cycle everywhere. It's a long ride down a street with no traffic signals--a street I used to race on at night sometimes when I lived in Hanoi, just for exercise and good fun. My one-speed didn't go very fast, so it was OK that my brakes didn't work so well.

My friend is retired from the Ministry of Health, where I got to know him. He used to ride a small rusty old bike, one that made people laugh even before bicycles were concerned "outdated" and "old-fashioned" in Hanoi. When all his friends and colleagues switched to motorbikes, they asked him why he continued to cycle. "I always cycled, I still cycle," he would reply, a little confused as to why they asked. 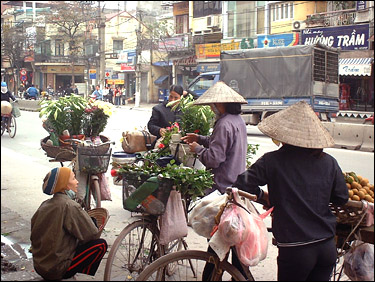 One of the many charms of Hanoi back then was that cycling was such a common and accepted form of transport. There were few cars or buses, with the traffic about half bicycles and half motorbikes. We cycled in the intense heat, riding as slowly as we could without falling over, and stopping under trees near stoplights. We cycled in the rain, and arrived soaking wet, if we didn't want to stifle under the plastic raincoats for sale everywhere.

A good friend of mine worked for the United Nations, her office near my home. On our frequent lunch dates, I would pick her up on my bike, and she would break into arias as I rode her over the many potholes. I teased her that the UN wasn't paying her enough. The arias pretty much stopped when, to our surprise, we discovered that her riding sidesaddle was perfectly safe and a lot more comfortable.

One day a young woman I had just met invited me to her home in the village. I didn't bother asking her how far it was, and we ended up pedaling for about two hours to get there. It would never have occurred to her to tell me; she took it for granted that everyone, back then, was fit enough that riding for a couple hours could only be a pleasure. And it was. Her parents took me to the pagoda, fed me lunch, and after she dropped me at home, I never saw the woman again.

My bicycle, a Chinese Forever, began to feel like a part of my body, another limb. It wasn't quite as ugly or rusty as my doctor friend's, but I never bothered buying a proper lock for it, as it was not susceptible to being stolen. The brakes didn't work in the rain, so I dragged my sandal on the ground to stop. Every few days I would get the tires pumped on our street corner by a lovely old man with a long white beard; another man on the same corner regularly fixed it for me. He still gives me a friendly greeting when I walk or ride by. I would leave my bike with him and walk off and forget about it, and hours later would receive a scolding as well as a functional bike. Back then, every street corner had men pumping and fixing bikes, so my complete lack of knowledge of bike maintenance wasn't a problem.

On weekends, I would ride far out of town. Once a young Vietnamese female friend joined me, complaining of a cough. I suggested we not go far, and she assured me she would tell me when she got tired. Three hours later, we found the perfect picnic spot, a grove of bamboo trees, and stopped there to enjoy our picnic lunch. I slept great that night; she assured me the next day that she hadn't felt the least bit tired.

Back in 1994, there were almost no traffic lights in the city. People simply slowed down and wove through each other. We weren't individuals on bikes; we were drops of water, an undifferentiated part of a collective body. Children in particular would sail carelessly from a side street onto the main road, and everyone would gently weave to make space for them. Crossing the street meant simply plunging in, and allowing everyone to move around you: parting the waves, as it were. There was a beauty to it that can never be replicated in modern traffic systems.

Over the years, things changed. The government relaxed the rules on imports of motorbikes, and motorbikes flooded the city. Several months ago, Vietnam joined the WTO, and now cars are pouring in. The government, scrambling to make space for all the cars, is considering expanding car parking. It already banned cyclos (cycle rickshaws) from most streets years ago. People park their cars and motorbikes on the sidewalks. The corner bike pumpers and repairers are disappearing. A few fancy modern bicycles have appeared, and the government has painted cycle lanes on some streets that are usually blocked by parked cars or motorbikes or other obstructions. Some people still cycle, but it is increasingly dangerous and unpleasant in the new traffic mix, and with the fumes from all the motorized vehicles.

So when I went to see my retired friend in January, I took a motorcycle taxithe kind where you sit behind the driver on his motorbike. Only in small cities do they have a similar form of taxia bicycle with a padded seat on the back for the paying passenger.

My friend is doing much better. He almost died a year ago, and I had placed his photo on my altar. He was eating through a nose tube for months, completely paralyzed, unable to talk. This time he was back in a wheelchair, feeding himself a tangerine, and able to speak full sentences at a time. His wife, the incarnation of patience and loving virtue, explained to me the incredible amount of work required to rehabilitate him. "When I took him to the doctor the last time, the doctor was amazed," she said. "He was only supposed to continue to deteriorate. We discussed it, and he said it's in part because my husband cycled everywhere that he is so strong and able to bounce back." She went on to inform me that various of her husband's friends and colleagues, who had been so healthy when her husband first became ill, are now dead of a variety of diseases--cancer, heart attack, stroke.

I know cycling is no guarantee of a long life, or of good health. But talking to this elderly couple, I had to wonder whether they are a dying breed--or a glimpse of the future. The air in Hanoi is so filthy now, if I walk too much I get queasy by the end of the day. The government has succeeded in making all the motorcyclists wear helmets, so the cracked head syndrome is apparently declining, but what of all the other consequences of the frequent accidents? What of all the people on foot or bicycle?

Tearing down buildings to build parking for the ever-growing number of cars, and allowing motorcycles and cars to take over the sidewalks, can't last forever. Someday people will notice that they aren't getting anywhere any faster on motorbike than they used to on bicycle. Someone who remembers will miss the days of cooperation and friendliness on the streets, where people would cycle side by side, chatting, and where students would ride beside foreigners for miles for a chance to practice their English.

It might take peak oil and rising oil prices, or an epidemic of respiratory diseases, or the natural longing for what we are losing: the noodle stands on the sidewalks; the elderly practicing tai chi in the parks and by the lakes; youth playing badminton in the middle of quiet streets; the wedding parties in velvet or silk ao dai carrying red boxes of gifts, traveling in a line of cyclos; the groups of kids riding two to a bike, laughing and swerving through the streets.

Surely someone will question whether modernity always means positive changes, whether the newly emerging KFCs are really better than the traditional food stalls, whether noise and pollution really are better than streets full of cyclists and air we could breathe, whether closing down fresh markets to make room for grocery stores is really an improvement. Whether we can't again see the days when doctors and students, foreigners and businessmen, cycled through the unpolluted streets of the capital, past people gathering at sidewalk stands, buying their flowers and vegetables from cycle carts and from people carrying their wares on shoulder poles.

Not out of nostalgia, but because they realize that some things in the past are well worth saving, and sometimes the only way to move forward is to take a few steps back. Surely someone will wonder whether we can't sometimes just say "No" to what the corporations are trying to sell us, and take away from us; whether we can't voluntarily turn back the clock--or rather, turn it ahead, to a more human future.