What If We Loved Our Kids More than Our Cars?
Debra Efroymson
Dhaka, 2006

Within just one generation, the lives of children throughout the world have changed radically, with just one indication among many being that so many children are now driven to school rather than walking. The same change that occurred in the US has happened also where I now live, in Dhaka, Bangladesh. Even though car owners are very much the minority, children's freedom has been greatly curtailed by those cars cars. Those whose parents do have cars are driven everywhere; those whose parents do not, unless they are very poor, are escorted by adults, and strictly prohibited from playing outdoors. It sometimes seems the only children in the city who have the opportunity for wholehearted pleasure, and who have confidence and skill in negotiating the streets, are the slum children.

One could, of course, sit back quietly and watch these changes, reflecting that surely it isn't as bad as it appears, or that something else will come along to make things better, or that children perhaps don't need to play outdoors, or meet and interact with strangers, or get to know those of other social classes, or learn how to get around on their own. It is easy to be defeatist and say, who am I to fight such changes? And there are those who feel the changes are inevitable, because the only response is to curtail cars--and that is a "freedom" or enjoyment we could never part with. It isn't that bad, people may argue; in some parts of the world children have access to parks and playgrounds, and while structured sports for children may not deliver all the benefits of street play, it is the best we can do in the modern world--and surely nobody wishes to give up the benefits of modernity.

We too, here in Dhaka, watched the changes and despaired. Later, I found inspiration in reading David Engwicht's Street Reclaiming; we bought sports equipment to give to the children on the street where our office is--a "residential" neighborhood with homes, NGO offices, a private university, a pharmaceutical company, a car repair center, and a fair amount of traffic--and made signs to put in the streets with such messages as "Love us, let us play". The kids took the sporting equipment and played on the roof of their apartment building; the signs seemed likely to turn rusty in our office.

Then one day, a few months later, a couple of my colleagues came into my office and announced that on that very afternoon, they were starting a cycle training program. A what? We have been working to promote cycling, and fighting with transport officials on the issue of cycle rickshaw bans in Dhaka; in the process we have collected a good number of small, folding bikes. Out came the bikes. We bought a few more for little kids, and taped paper with the message "Cycle training" over our old signs, and put up a banner, and later made a large sign showing Einstein on a bicycle--an amusing choice, I had to think, in a Muslim country--all to make the car drivers pay attention, slow down, and yield a lane or two to the kids. 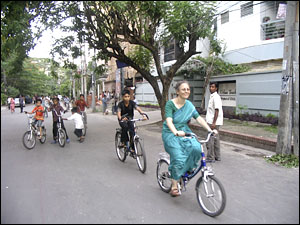 The first day we arranged for some friends to come cycle; almost nobody from our street showed up. Curious children and skeptical adults watched from their balconies. Later, a neighbor told us that people believed we couldn't be offering free cycle training without an underlying motive--which they took to be that we were planning to kidnap their children. How effective the media has proved in frightening parents out of allowing their children freedom of movement or opportunity to play! If only we could compare the likelihood of children being harmed by being kept under lock and key to the likelihood of being kidnapped.... But the woman who told us this was brave, or had a better feeling towards humanity, and brought her children, and reported to her neighbors, and the numbers began to increase. We advertised the program (for free) in newspapers and through handbills, and children and adolescents (and even adults) from different parts of town began to come, and a regular group of children showed up for the inestimable pleasure of riding a bike with other children.

Other organizations have started similar initiatives, though on small fields rather than on streets. Less than a year has passed, and we hope eventually people will realize the good sense of converting quiet streets into temporary children's playgrounds. In the meantime, other stunning and unanticipated results have occurred. Prior to the program, no children on the street knew each other, having always being escorted by parents, usually by car; now many friendships have developed. 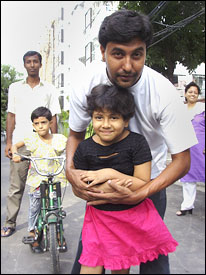 One of our volunteers, Topon Shikder (pictured) says: "We have created a platform which allows children from different apartment buildings to get to know each other, breaking the isolation which existed, in which everyone lived their separate lives. So now if someone is in trouble--is sick, or there is no male around--they can turn to each other for help. And of course the kids love it, they keep asking me, 'give me a bike, give me a bike, when is it my turn?' It's wonderful to see their excitement."

We have slum children helping to run the program and fix the bicycles; like it or not, if you want to ride, you have to interact with these kids, and interact they do. A couple of child servants, who have no other opportunity for recreation, sneak away to join, and revel in being treated the same by our staff as the rich neighborhood kids. The children who repair the bikes have gained confidence as well as new skills, marching about with great authority; twice a week a few of them eat lunch with our office staff. During school holidays, children from the street come to our office to borrow bikes, usually in groups; it is now perfectly normal to have children moving around as freely as if it were their office.

Another of our volunteers, Muminul Islam says, "Street children--those who pick rags or papers, or sell peanuts at the nearby lake, to make a little money--often wander to our street to watch, and stand with their mouths almost hanging open. So I send one of our kids with a bike to ask the child if he wants to ride for a few minutes. I can't express how happy they are! Sometimes afterwards they get so excited, they come up to me and grab my hand, calling me uncle or brother, and thank me profusely."

I wish I could say that the adults on our street have also thanked us warmly for the initiative, and that drivers slow down, or avoid entering our dead-end street altogether so as not to disrupt the children. Most adults, including the parents whose kids participate, are delighted; when they see drivers racing on the street, or honking loudly at the kids, they complain about how uncivilized they are. But other adults tell us we should take the program elsewhere, and one woman--a child physician--complained that it's hard on drivers because "we have to slow down"; others ask why we take so much space (blocking one or two lanes of a three-lane street). Our volunteers shake their heads in wonder--it really seems that people love their cars more than their children, they say.

What we are giving to the children at one level seems so minor-?the chance to ride a bike up and down a stretch of road, while passing drivers blare their horns. On the other hand, we are giving them the freedom to leave their homes unescorted, to gain a new skill, to form friendships, to interact with different kinds of people...and to have fun. Perhaps, if things go well, if we are able to continue and expand, we will even succeed in communicating our key message: that cars should not be allowed to destroy the joy in children's lives. Perhaps people will see that children don't have to grow up trapped in cars and behind TV, helpless and dependent, growing up in fear of strangers and of the world around them. Perhaps they will come to see the harm in the mentality that has developed, in which any sacrifice of children's natural state seems preferable to restrictions on cars. For it must be a sick society indeed that can, and does, and continues to, love its cars more than its children.