My City Is Mine, Thanks to my Wheels
Debra Efroymson
Dhaka, 2006

I was riding my folding bike with a group of ragtag kids from a slum. This is an old story; I haven't joined them in a while, because it's too aggravating to cycle in Dhaka. The drivers honk too much.

We passed a guy in a wheelchair, the old-fashioned kind, self-propelling. We looked at each other for a moment with curiosity, that distant look you have when looking at someone with whom you have absolutely nothing in common. Hey, look, a man in a wheelchair. Hey, look, a foreign woman on a bicycle. Then it occurred to me that we did have something in common after all--we're both on wheels, operating on our own power. I smiled at the recognition. He looked at me with puzzlement, then returned the smile.

Of course I can't guarantee he had the same thought I did, but I enjoyed believing it.

Because that's it, the magic of cycling in this crazy city of 12 million people. On most levels it's a miserable experience. You're either stuck in traffic, trying to weave through it while aggressive drivers lean on their horns, or you're in danger of getting killed by those same aggressive drivers enjoying a brief hit on the accelerator before getting stuck again. Doesn't really have much to recommend it, which is why I don't do it often. 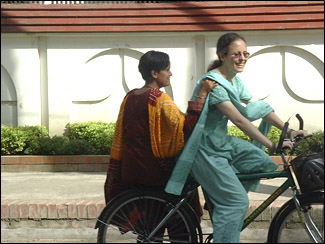 But when I do cycle here, I learn all kinds of interesting things about this city--or more specifically, its people. Like the time I got stuck at an intersection, where I needed to run the red light. OK, maybe it's not the most legal way to proceed, but it does mean I can get ahead of the buses and have a clear road for a ways, turning off of the main street before the buses catch up to me. Much safer than waiting and trying to navigate the street amongst a bunch of buses, and running a red light is easier than trying to cross most streets on foot. But I was trapped, with a "baby taxi," the Bangladeshi version of a tuk-tuk, in front of me, and a bus to my right.

The bus attendant saw my predicament, got off the bus, and told the baby taxi to pull up. In front of the bus. Waved me through with a grin. Imagine my surprise, slowing down his own bus, risking being yelled at by the driver, in order to help a stranger. Call me a sucker, but moments like that warm my soul.

Another day it was a guy with a vegetable cart. I was passing him through heavy traffic, and another cyclist was coming the other direction. The guy with the cart stopped the other bicycle, let me through, then waved the cyclist on. I've often had rickshaw pullers signal for me to pass them. Are they this friendly to Bangladeshis? My cycling friends assure me they are; once a friend waiting for a signal had a whole group of rickshaw pullers encouraging him to run the light--out of friendliness, not an eagerness to push him into the jaws of death.

Walking to the office one day, I smiled at a kid in a school uniform. He attends a school for the hearing impaired, across the narrow street from my apartment building. I don't know the people who live in the apartments on our street, but I recognize these kids, since they actually walk in the streets. I assumed he was deaf, and was surprised when he greeted me: "Where's your bicycle?" Another day I was on the bike, my bright red one with eight-inch wheels. The hearing-impaired kids were playing badminton on the street. As I wove through them, I thought, what if this were the norm? It was easy, for that brief moment, to imagine Dhaka as a human city.

Or take my friend Nahid, a double amputee following a bomb blast. He moves pretty well on crutches, with his two artificial legs, though walking in Dhaka is hard enough for the able-bodied. But he's much smoother on a bicycle, and it's a pleasure to watch him. He has a pretty limited sphere of movement, with Dhaka's insane traffic, but what if--I'm dreaming again--what if it were normal for amputees and the paralyzed and deaf kids and all of us able-bodied people who never get to walk or cycle, to move around powered by our meals rather than fossil fuels? When I say that would be good for the environment, I mean a lot more than global warming and air pollution. An environment in which people of different abilities, incomes, and beliefs were mixing and moving freely on the streets, with all kinds of opportunities to interact: now that would be a healthy environment. To the extent I experience it here, I'm eternally grateful.

When I really want attention, I cycle in a sari. Strange enough to see a foreign woman, in a sari, but on a bicycle? Could be amusing if me and my six meters of cloth landed up in a bundled heap on the ground, but I've discovered it's actually pretty easy to maneuver, as long as the bike is small. Something else I would never have learned if I didn't ride a bike. Maybe it sounds like it should be on the list of a million things I'd be no worse off for not knowing, but I believe that some crazy eccentric things can enrich our lives in unexpected ways. After all, one of the reasons I work for more people-oriented cities is because I am so fascinated by people. They are endlessly interesting. They do all sorts of odd unexpected things. If I didn't have so many chances to mix--chances I have because I live in Dhaka rather than some alienating American city, like the one I grew up in--I would never know that about people. And yes, I'd be a lot worse off for not knowing. 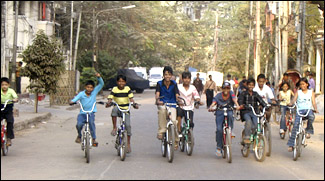 Yesterday a TV reporter asked to interview me, for Bangladesh's Victory Day. "You ride a cycle, don't you?" he asked, and requested that we do the interview on the street, with me on a bike. It reminded me of living in Hanoi, where I really did ride a bike all the time, to the extent that I felt like something was missing if I didn't have my old Chinese Forever one-speed with me. Generally I hate the idea of identifying myself with my possessions, but in this case...I can live with it. Getting on a bike after over a week reminded me how blissful it is to cycle, and I started wondering why I don't do this more often. Oh yeah--because the revolution where the ragtag slum kids and double amputees and badminton-playing hearing-impaired students take over the streets hasn't happened. Yet.