On Bicycles:
Fifty Ways the New Bike Culture Can Change Your Life, edited by Amy Walker 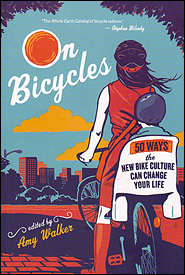 This is a collection of essays on practical cycling edited by Amy Walker, a co-founder of Canada's excellent Momentum magazine.

Although the firm hand of the editor shows in the stylistic similarity of pieces drawn from a variety of authors, comprising bloggers, journalists, and academics, a bit of authorial consistency is just the ticket for a book aimed at the "interested but concerned" 60% of anglophone North Americans who consistently say they'd love to ride their bikes for local transportation if the roads weren't so scary, and if by gosh it wasn't for the rain or the heat or the kids or whatever excuse people come up with to relieve them from having to think outside that glass-and-metal box.

Walker has all the angles covered, as sampling of section and chapter headings will show....

"Part One: For All the Right Reasons" includes titles such as:

"Part Two: Gearing Up" covers the technical matters so beloved of many enthusiasts but intimidating to newbies, explaining bike types from fixies to folders to e-bikes to the various form factors of cargo bike, how to deal with shop rats, and the lowdown on weather and clothing.

"Part Three: Community and Culture" is perhaps the most appealing, guiding one through the overlapping worlds of ciclovías, DIY collectives, the bike party world, and more, while "Part Four: Getting Serious" delves into "advanced studies" in urban cycling and examines....

These are just samples; there is much, much more.

Though much of the book will be old news to advocates and enthusiasts, it will most likely be a gently revelatory immersion in the world of everyday cycling for that 60% who are hungry for guidance into pedal-powered transport and the efficiencies and new experiences it can bring.

Though the breezy tone is not to my personal liking (and the word "amazing" ought to be surgically extirpated from Walker's vocabulary), that very tone, and the carefully considered progression of the chapters, make the book accessible to the millions of people out there who are weary of havign to drag a car with them everywhere they go, even a few blocks to a coffeeshop, but who have been told for all their lives that the bike is nothing more than a modest toy.

They've heard the buzz now; they know that something's happening, but they don't know what it is--but unlike bob Dylan's Mr. Jones, they are hungry to find out, perhaps join in.

This friendly little book can show them the way. It would be an excellent gift for your colleagues and acquaintances who admire you for riding to work but can't get themselves to believe that they could do it too.

You might lose your Superman (or Superwoman) status once they read it--but you might just gain their company in the fellowship of the wheel.