David Herlihy is well-known in cycling circles for his book Bicycle: a History--in fact, that tome has become almost mandatory reading for lovers of the wheel. In The Lost Cyclist, he narrows his focus to give us an intimate study of a world tour gone horribly wrong, and a taste of life in the earliest days of cycling as we know it, when riding for long distances became feasible. It is the story of a cycling journey through cultures as fractured and politicized as today's, and probably more so--and more dangerous.

In the 1890s, cycling was a social phenomenon, influencing everything from the women's rights movement to the very shape of cities. (It also unintentionally quite literally "paved the way" for the automobile and the ills of sprawl and congestion that afflict us today, and to save us from which we look again to the bicycle.) It was also a technological phenomenon: by 1900, there had been such an inundation of invention relating to the bicycle that the United states maintained a separate patent office to process the 50% or so of applications that applied to the rapidly evolving velcoipede. 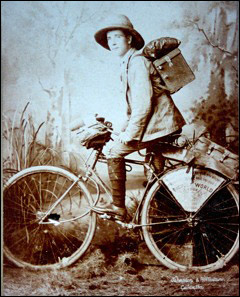 Lenz in India, shortly before his disappearance
A small, charming, and handsome Pittsburgher named Frank Lenz came of age just before the advent of one of the most important developments in cycling's history, that of the safety bicycle--that is, the bicycle with two roughly equal-sized wheels, with the rear one driven by (usually) a chain.

This democratized the bicycle, for it removed the ever-present danger of flipping over the bars that was an innate hazard of riding high-wheelers. Lenz, who had learned to ride and love high-wheelers, nevertheless saw that the safety was the bicycle of the future. He also thirsted for adventure, and no doubt a taste of glory, and decided to go around the world by bike.

The prospective glory may have been diminished somewhat by three other riders having done so already: Thomas Stevens on a high-wheeler, and Thomas Allen and William Sachtleben, on safeties. Lenz, commencing his journey in 1892, made himself stand out by deciding to be the first to ride around the globe using yet another of cycling's groundbreaking technical developments, the pneumatic tire.

And he decided that he would not, if there were any way possible to avoid doing so, take trains or river steamers as the others had often done.

Because of the utter lack of any roads whatsoever in many countries back then, this meant he often walked his bike, or even hired what he invariably referred to as "coolies" to carry it while he tramped along. But in any case, he went almost every mile on land under his own power.

And he almost made it. He disappeared in eastern Turkey, the last "lawless" country he was to cross before his return to Europe, apparently murdered after being a little too careless about showing off his store of money--silver coins, in those days--in a region renowned for banditry.

This was in the days when a standard piece of equipment carried by cycle tourists was a revolver. Stevens had carried one; Allen and Sachtleben had carried one each, and they had traversed the same region of Turkey--but, as the latter two pointed out, they could watch each other's backs, whereas a man alone could not. (Stevens had taken a socially safer route.)

Lenz was stopped not by accident or equipment failure--in fact he shipped spares--tires, compnents, even a spare frame--ahead to major cities on his route, and didn't even suffer many flats. It was human frailty--his own pride, and others' greed and callousness--that did him in.

And the man sent to find his body and bring the killers to justice was William Sachtleben. And so this is more the story of Sachtleben and his investigation than of Lenz and his adventure.

The book devotes nearly its first third to Allen's and Sachtleben's own round-the-world journey, which is fascinating in itself. The middle third focusses mostly on Lenz himself and his trip--well-documented, as Lenz was a competent photographer and sent dispatches with photos back to his sponsor, Outing magazine, up until two weeks before his death.

The last third of the book concentrates on the incredible frustrations Sachtleben endures trying to ensure that justice is done in a fractured country dominated by tribes that are each loyal only to their own, and which is also enduring a civil war--and the first Armenian genocide--during the entire time he was there. He also faced stonewalling by the US State Department, which was trying to curry favor with the Turkish government, as well as the reluctance of his primary witnesses: Armenians who stood to die if they implicated (however justly) Turks or Kurds in the murder.

In the end, Sachtleben, like Lenz, failed: he never found Lenz's body, and the prime suspects, tipped off by compatriots, had left the country long before diplomatic nudging resulted in a conviction in absentia of several men--men who may not even have been the real perpetrators.

So, while it is in effect a story of frustration, it is also the story of several noble, albeit doomed, efforts to shrink the world--to find common ground with other branches of humanity. (Lenz often commented how he could empathize with the Chinese peasants' hate of foreigners when he saw how badly the British treated them; Allen and Sachtleben spent their winter respites learning the basics of the languages spoken in the next several countries they were to traverse.) It is also the story of the bicycle at a time when technical changes brought about improvements that make current day advances seem piddling by comparison: nothing has yet superseded the diamond frame, the chain drive, the pneumatic tire; and as for less dramatic variations in design, why, Lenz's bike (which, like Allen's and Sachtleben's, was a fixed-gear) came with front suspension!

So it's a story of frustration, of tragedy, and yet of accomplishment in spite of failure--for Lenz almost made it, alone and unprotected, dependent on his own wits, his charm, and his simple yet ineffably capable machine, a bicycle not so much different from those we ride today.

A good story, a rousing historical document, and a tribute to the enduring glory both of humanity's aspirations to exceed oneself, and of "the most efficient machine ever made," the bicycle, which can carry both body and spirit farther than anyone thought possible only a few generations past.