On a typical Wednesday evening, shortly after 9:00 pm, I turn off of Figueroa onto Avenue 42. It's a quiet dead-end street lined with houses built in the twenties and thirties--a moderate income neighborhood with friendly faces peering out from front porches. I pedal up almost to where the street ends and the Metro Rail goes by with a slight rumble, then turn into a short driveway leading to a one-car garage, dimly-lit, with a clutter of bikes, parts, and tools oozing onto the street. One or two riders have already arrived and are busy fixing flats, stripping donor bikes, or building up their own Frankenbikes. 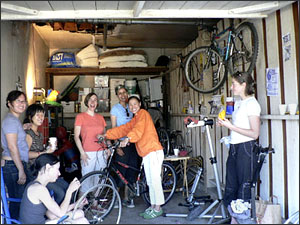 This is the East Los Angles Bicycle Oven, or ELBO. Actually it is in Northeast L.A., and we call it simply the Bike Oven. Community bike shops have been proliferating in the U.S. in recent years. They are non-profit local bike facilities established for the express purpose of serving the bicycle community with do-it-yourself maintenance and repair services ranging from lube and adjustments to building a whole bike. No new bikes are sold here, and seldom even used bikes. These wildcat shops are viable, given the simple and (relatively) inexpensive tools, facilites, and equipment required. This is not rocket science--almost all bicycle users can learn how to do it. Teaching the techniques is a prime directive.

For Los Angeles, ground-breaking for the community bike shop concept was done by the Bicycle Kitchen, now located on Heliotrope near Melrose in the vicinity of Los Angeles City College. About a year ago, Josef decided to spin off the Bike Oven. Such an enterprise was badly needed in Northeast L.A. The Kitchen was about ten miles away and not easy to get to. It was not readily accessible to the kids on BMX bikes, neighborhood youth wanting to build a basic transportation bike, and the rest of us in the Arroyo Communities. 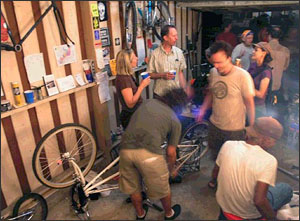 A humble beginning: Josef laid in some basic tools, made the announcement, and several of us showed up to huddle under the one flickering fluorescent light on a cool and drizzly night in the fall of 2005. A neighborhood kid with high hopes wheeled in his twenty-incher with a flat rear tyre. Our first project had materialized. OK, pull the rear wheel, someone said. Can't do it, we don't have the deep socket to get to the nut through the long hollow foot peg bolted onto the axle. Our first challenge! At my suggestion, we left the wheel in place, popped off one tyre bead, pulled out the tube, patched it, and popped the bead back. The kid pedaled off with a grin.

Upon returning to my home, 2.25 miles distant, I surveyed my ample tool collection and picked out a modest set of duplicates to donate to the Oven. Shortly after, the Bike Kitchen, upon hearing of this fledgling effort, donated a couple of work stands and a wheel building stand. Now we were taking shape. Each Wednesday night, a few more fresh faces appeared. Mostly with ancient ten-speeds and cruisers with bent wheels, broken spokes, rusted frames, and crippled derailleurs. A really bad example would be stripped for parts. A not-so-bad example would be built up with the donor parts.

Word spread and the crowds got larger. Sometimes, someone would show up with a couple of pizzas, a six-pack, or maybe some ice cream. The tool collection expanded, donations of parts and supplies grew, we all learned some new tips and tricks. It was becoming more than just a place to get chain-grease under your fingernails. Other Northeast L.A. bike activities began to start or end here. 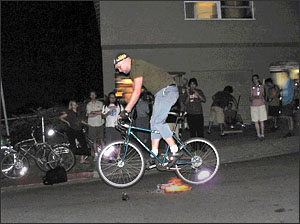 Josef was one of the organizers of the Spoke(n) Art bike ride which toured the art galleries of Eagle Rock and Highland Park. The ride ended with a party at the Oven. We started having what we at first called an Alleycat Race, a three-mile loop around local streets ending up at our dead-end stop sign. Criticisms about this came in: it was not a true Alleycat race since the structure did not adhere to the traditional definition. But the race was very popular and grew to two races; a three-miler for the casual urban biker, and a six-miler for the more serious racer. But now we call it an 'AlleyRAT' race.

Even more events have centered around Bike Oven. We launched the 'Sing-Along' ride at the Oven and are planning to start other events here in the future. Close by are various art galleries where NELA Bikes! has put on events as part of last year's Bike Summer and more recent film show events. Within the radius of a few blocks is a growing bicycle culture scene equal to or more intense than in the other urban areas of L.A.

As bicycle use increases (and it has), used bike availability will dwindle, and they will become more costly. More people will become interested in getting the old clunks on the road and keeping them going at a minimal cost. As bike culture increases, interest in related activities will also increase (we see it already), and community bike centers like L.A.'s Bike Kitchen and Bike Oven will be valued more than ever.

Editor's note: The Bike Oven moved into new and larger quarters on August 12th, 2007; the new address is listed below.